In this episode of Switched at Birth, called “The Physical Impossibility of Death in the Mind of Someone Living,” John is reluctant to slow down after his cardiac incident and Bay loses something special. 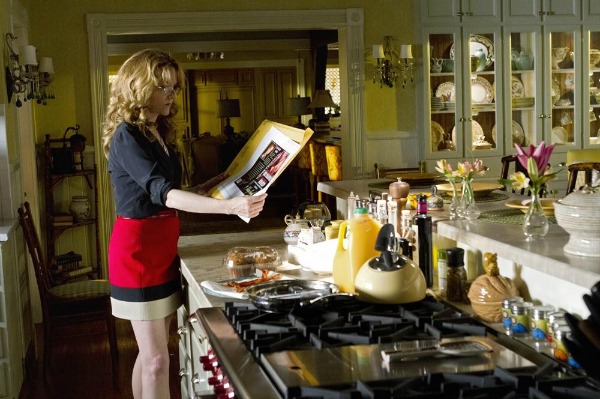 After last week’s trip into fantasy-land, the show was back to all the regular drama in this episode. It started out with John (D.W. Moffett) coming from the hospital and acting like a smiley, happier version of himself. He didn’t want anyone to coddle him and expected to go right back to his normal routine without any adjustment. Given the kind of guy he is, it wasn’t too much of a surprise that he would act that way, but it took a while before he realized that he needed to make some changes.

Daphne (Katie Leclerc) seemed to take John’s brush with death more seriously than anyone else, carefully watching everything he did and ate. She even went so far as to tell Jace (Matt Kane) about the attack just so that it would stop the two from arguing politics. He showed his appreciation of her honesty by offering to give her CPR lessons on the kitchen floor, which backfired when John discovered them. Funny enough, John didn’t seem to have a problem seeing a young man about to make out with his daughter. No, his problem was more with the fact that she’d told Jace the truth.

John continued to try and act like everything was fine until Kathryn (Lea Thompson) finally put her foot down and told him enough was enough. When she got him to realize that his pride wasn’t more important than sticking around for his family, he started making an effort to take care of himself.

Regina (Constance Marie) was asked to bring in more clients by her boss and came up with the brilliant idea to try and get Angelo (Gilles Marini) and his new partner to let her design their restaurant. She wasn’t too happy when her boss then tried to make a play for Angelo, but ultimately he admitted that his heart was hers and that he was willing to wait until she was further out of rehab. It was all sweet until he got a text saying that his daughter had been found. Not that I didn’t want him to find his baby, but I have to wonder what will happen between him and Regina now.

As for Bay (Vanessa Marano), she spent the episode floating around Ty (Blair Redford). The two of them were pretty busy in his bedroom when she got the call about her dad and it took them a while to get back to that point again. But after a run-in with an ex-fling of Ty’s and an admission by Bay that she was still a virgin, they made it back to his room. I loved that he took the time to make the place as romantic as he could for her first time.

“He had a heart attack, not a tape worm.” 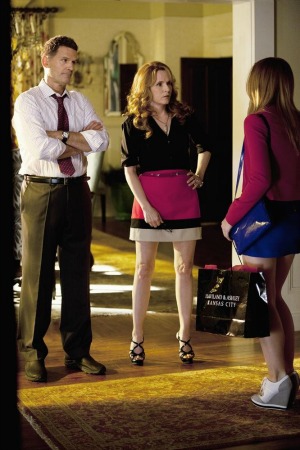 “If only there was a way to put your shoes in one place at night and have them be there the next morning.”
“Not helping.”

Bay going to Daphne to talk about “hanging out” with Ty.

Daphne pointing out that Ty would probably take care of taking off stuff at the right time. That made me giggle.

“Bi-cultural joke. Quite funny for a Republican.”

Daphne interrupting the argument with asparagus.

Briggs accidentally spilling the beans about Ty and Aida hooking up. Oops.

John walking in on Daphne and Jace’s CPR lesson.

Travis telling Toby that he didn’t want to work at a car wash for the rest of his life.

The look on Regina’s face when her boss said she thought she had a vibe with Angelo.

“Isn’t being here worth every sacrifice you have to make?”

Poor Toby trying to find out if he could go to college.

Kathryn putting her hand on John’s heart and telling him that this was their new reality.

Daphne pointing out to Jace that if he could ride a unicycle, he could learn to swim.

“Wow, even a psycho meltdown can’t scare you away.”

Ty making his room all romantic for Bay. Very sweet.

Are you happy about Bay having her first time with Ty?