Saving Mr. Banks is heading to theaters this holiday season. To kick off its promotion, check out the first trailer that features Tom Hanks as Walt Disney himself. 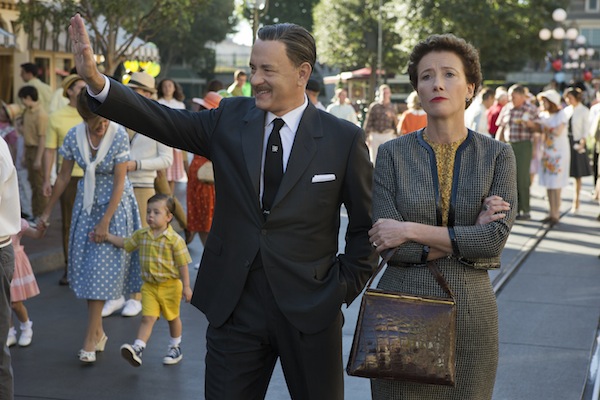 Would you believe that behind every heartwarming Disney story is a heartwarming true story? In the case of 1964’s Mary Poppins there is. In 1961, Disney invited Travers to Los Angeles in hopes of gaining the rights to her beloved book. It was a favorite of his daughters and he’d promised them that he’d put Poppins on the big screen.

For two weeks, Disney pulled out all the stops to impress Travers. But his showmanship and razzle dazzle fell on deaf ears. The author wasn’t interested in his vision for the character. It wasn’t until he realized the deeper meaning behind Poppins that Travers began to budge.

Poppins wasn’t just a character Travers pulled out of thin air. She wasn’t just a savior of children, she was a savior of parents. When Disney learns of Poppins’ sentimental roots, he’s able to crack Travers’ exterior. As we all know, the rest of the story is Hollywood history.

Check out the trailer for Saving Mr. Banks: