Don’t call her Stacy Ferguson anymore, Fergie has legally changed her name to Fergie Duhamel in anticipation of her first child with actor Josh Duhamel. 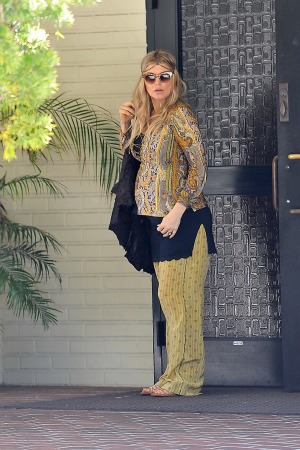 There are a lot of big changes coming Fergie‘s way, a new baby and a new name. On July 10 in a Los Angeles County courthouse, Stacy Ann Ferguson officially became Fergie Duhamel.

The 38-year-old has long been called Stacy by her friends and family in private. The Fergie nickname didn’t come around until her Black Eyed Peas days which began in 2003.

Even during her child performer years on the TV show Kids Incorporated, and with the all-girl group Wild Orchid, Fergie stuck to her birth name.

With a child on the way with husband Josh Duhamel, the timing probably felt right for the singer. The couple are expecting their first baby sometime in late August or early September, according to People.

The couple announced the pregnancy on Twitter back in mid-February. The news was exciting for their fans since the couple weathered through baby bump speculation for years in the press.

In addition to the pregnancy rumors, Fergie’s name has also been an item of mention in the media and in her own lyrics. Her 2006 song “Fergalicious” even addressed the issue.

She sang, “They always claim they know me/Comin’ to me call me Stacy.”

Now, there will be no more confusion. Fergie is officially Mrs. Fergie Duhamel.