Carly Rae Jepsen better stick to singing. On Sunday, the singer proved baseball is not her best sport after her first pitch went awry at the Tampa Bay Rays game. 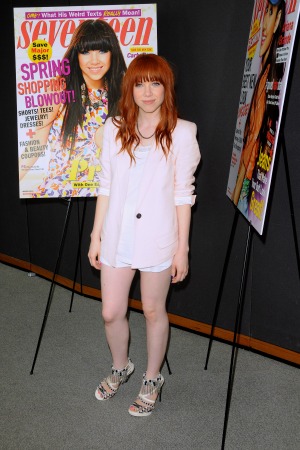 Not everyone is athletically inclined and that is exactly what Carly Rae Jepsen proved on Sunday. The singer threw out the ceremonial first pitch at the Tampa Bay Rays game versus the Houston Astros in St. Petersburg, Florida.

The pitch didn’t go as planned though. The “Call Me Maybe” musician held onto the ball too long. Instead of sailing into the catcher’s mitt, the ball dropped into the grass close to the pitcher’s mound.

Carly Rae on bad boy Bieber: The media are brutal >>

The humiliation didn’t end there because the ball bounced off a cameraman’s bag on the ground before rolling back towards home plate.

The 27-year-old handled the bad pitch with aplomb though. She mouthed “Oh my!” and giggled as the baseball went awry. Jepsen was visibly embarrassed, but she had a smile on her face the whole time.

According to the Fox Sports broadcasters though, Jepsen had quite an impressive warm up. They claimed she threw “strike after strike.”

She’s not the only one to have a bad day on the mound.

Back in 2009, Howard Stern producer Gary “Baba Booey” Dell’Abate threw out what was considered to be the worst first pitch in Major League Baseball history. He threw the first ball out at a Mets game only to hit the umpire with his pitch.

Jepsen holds quite a few Billboard records, but this MLB record is probably one she would like to forget.