Junior is busy saving the town from a meningitis outbreak while Angie tries to keep from drowning. Junior’s chivalry may be short lived, though, when Angie’s cries are finally heard. 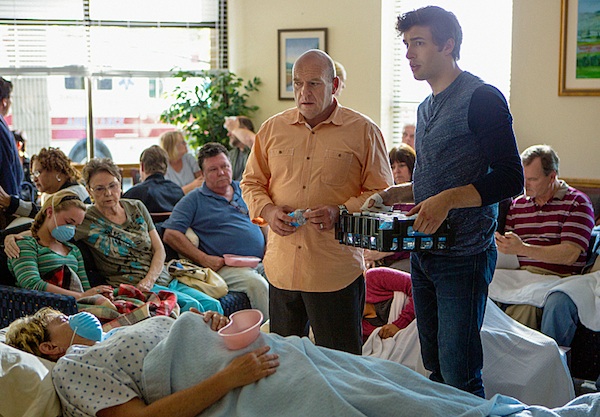 We really don’t like Junior, but it’s easy to see why he’s got the town convinced on Under the Dome, which just leaves us feeling kind of confused. If only he weren’t holding Angie hostage in a bunker, we might be able to reconcile his dumb moves. Instead, he’s this ticking time bomb we know is about to go off. That time may be near. That is, only if Big Jim is a decent guy. What we’re saying is, Angie’s fate is clearly up in the air.

The episode starts with Julia’s suspicions of Barbie (Mike Vogel) growing even more. She takes his map and follows it to the spot that’s marked in red, which just happens to be DJ Phil’s trailer house. She finds her husband’s car parked outside and confronts him. Before he can answer, he starts to feel sick and then passes out.

At the dome, Linda manages to quell a riot with Big Jim’s help right before she passes out as well.

Everyone’s converging at the clinic as sick people who have been fainting are rushed inside for treatment. There aren’t enough doctors.

Carolyn and her partner Alice also show up with Joe and Norrie to have them checked out after they have another round of seizures. Alice is a doctor and offers her assistance when she arrives at the clinic to find it understaffed.

At the hospital, Julia asks Barbie how she knows Phil. He plays dumb until she pulls out the map. She wants the truth but begins to feel faint.

Alice thinks the sickness is meningitis, which is extremely contagious. People who have previously been vaccinated are fine. Those that aren’t are in trouble and need antibiotics, but the clinic doesn’t have enough to treat everyone.

Big Jim and Barbie head to the pharmacy to find more. In the meantime, they have to quarantine the clinic to ensure the virus doesn’t spread, and Big Jim puts Junior in charge of making sure no one leaves.

While Junior is threatening the town with his new toy, Angie is trying to escape by yelling through a vent. She grabs hold of one of the pipes and it bursts. Water begins spilling quickly into her underground cell. Is it bad I’m glad something exciting is actually happening to her? Her storyline was feeling a bit weak.

The answers are at the cabin

Julia is nothing if not determined. So much so that despite her fainting spell, she goes back to question Phil who is also sick. He mumbles, “I’m sorry, Peter. I can’t make it to the cabin.” But Alice tells Julia to get back to bed before Julia gets any more information.

Julia tries to leave because she thinks Peter is in trouble. She needs to find the cabin Phil mentioned. She talks to Junior who asks if it could be the cabin he found Barbie at. He tells her it was at the end of Sparrows Lane but won’t let her leave the clinic to find it.

Julia doesn’t take no for an answer and goes to her husband’s office. She takes his access card and uses it to escape out a back entrance.

Once at the cabin, Julia discovers an envelope of papers that indicates her husband had drained all their bank accounts. They are broke, and their house is in foreclosure. Julia drops the papers and passes out on the cabin floor. 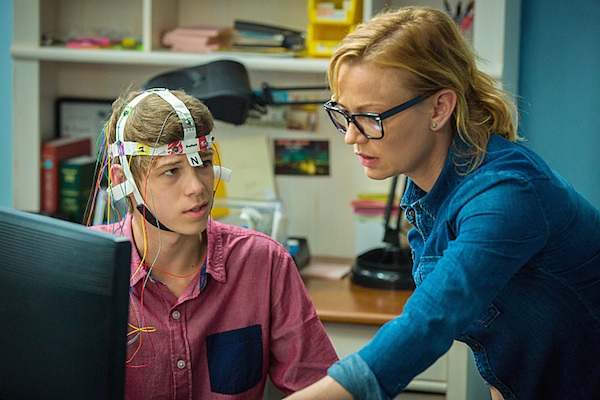 From kidnapper to hero

Big Jim and Barbie go to the pharmacy only to find it’s been raided.

Barbie and Big Jim deduce that Lester took the drugs. They find him at his house burning the drugs because it’s God’s plan for the people to die.

People start trying to leave and Junior shoots the ceiling to keep people back. Junior then gives a moving speech about how they all have to work through this together, which is way more thought provoking than we thought possible from him. He puts the gun down and walks back into the clinic. No one leaves.

Norrie figures out that the seizures happen when she and Joe touch. They test the theory and are smart enough to film it. They both have another seizure when they clasp hands. They wake up and watch the video, which shows them both saying, “Pink stars are falling in lines.” Then Joe sits up during his seizure and puts a finger to his lips saying, “Shhhhh.” Joe thinks it’s a sign the dome doesn’t want them to tell anyone.

Big Jim to the rescue?

Barbie goes and talks to Phil. He wants to know where Julia is, but Phil doesn’t know. He also wants to know what Phil told her, and what she was asking. Phil admits that Peter came to him asking if he knew a hitman. Peter then sold his car to Phil for a steal. Phil told him if things were that bad, he should get out of town and start over. Phil thinks Peter took his advice and has no idea Barbie killed him.

Barbie asks Junior about Julia, and Junior admits he told her about the cabin. Barbie wants the keys to his truck saying Julia is sick and will die out there if Junior doesn’t give them up. Junior complies, and Barbie finds her passed out on the cabin floor.

Barbie takes Julia to the clinic to get treated and is there when she wakes up. Barbie admits he’s a bounty hunter who met with Julia’s husband to reclaim debts he owed. Barbie tells Julia her husband must have skipped town.

Julia feels betrayed and tells Barbie that when she gets home, he’d better be gone.

Linda tells Big Jim about Junior saving the day. He asks Junior if he ever considered a career in law enforcement. Junior gives Linda a ride back to the station, and Linda gives Junior a badge.

Joe offers his house to Carolyn, Alice and Norrie since he’s the only one living there currently. They graciously accept at Norrie’s insistence.

Big Jim gets home late that night and hears someone screaming from the pipes in his kitchen. He goes to the bunker to investigate and finds it flooded with Angie huddled inside.