Two fans find Dave Matthews stranded by the side of the road on the way to see his concert and end up giving the front man a lift to his own show. 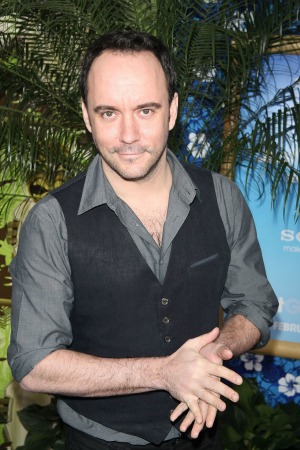 the venue, you spot the lead singer of said band hitchhiking on the side of the road.

Well, that’s exactly what happened this weekend to Emily Kraus and her boyfriend as they were on their way to a Dave Matthews Band concert on Saturday night. Yahoo News reports that the couple was driving to Matthews’ concert in Hershey, Pennsylvania when they spotted the rocker stranded on the side of the road.

“We saw him on the other side of the road and we pulled my car in here,” Kraus said. “And he picks up his bike and throws it up here.”

Matthews’ bike had broken down while he had been off for a pre-show ride and he suddenly found himself alone and without a phone.

In a video posted by a fan on YouTube, Matthews spoke about the incident.

“I did not have a cell phone on the bicycle. So I thought, ‘S***,” Matthews said. “And then a nice lady named Emily rode up in a red car with a bicycle rack on it and gave me a ride on to the gig.”

As for Kraus and her boyfriend, they didn’t quite know what to say once Matthews was sitting in the backseat of their car.

“We didn’t know how to make conversation with him, in fact, so we were talking about his tour and where he had come from,” Kraus said. “He had just been in Cincinnati and he said, ‘I’m taking a short break after this one because I have to drop my daughters off at camp.’ He was just a very humble guy.”

But the daydream didn’t end there for the pair. To show his gratitude for their rescue, Matthews invited Kraus and her boyfriend to dinner and gave them backstage passes to the concert. The singer also signed their tickets with a note: “Thanks for the ride.”

The whole day is something that neither of them will forget for a very long time.

“My cheeks still hurt from smiling, giggling and laughing all night long,” Kraus revealed on her Facebook page.

“I woke up this morning, and I rolled over and I said, ‘OK, yeah that really happened yesterday,'” she said. “It was surreal. We couldn’t believe it.”

CBS 21 posted an image of Kraus and Matthews posing in the car on the way to the concert.

Saturday’s incident wasn’t the first time that a rock star was found hitchhiking. Back in 2011, fans of U2 found themselves picking up front man Bono when he flagged them down for a ride to get out of the rain.

How would you react if you saw your favorite star hitchhiking on the side of the road?