Kris Jenner posts a picture on her Facebook page of herself holding a baby and encouraging everyone to watch her new talk show. Are we about to meet baby North, finally? 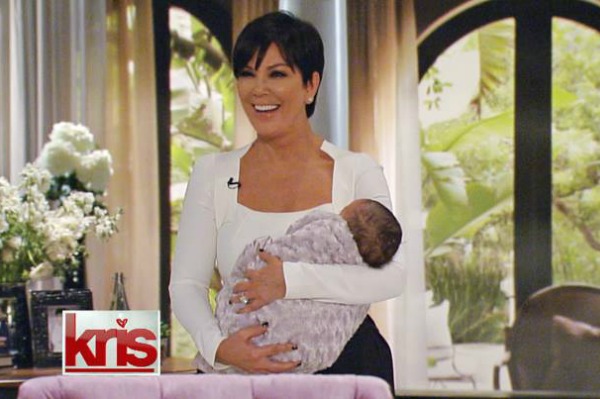 Kris Jenner is willing to do just about anything to get people to watch her new talk show, but could that possibly include bringing her brand-new grandbaby to the set? It’s been weeks since Kim Kardashian and Kanye West welcome little baby North, but the baby has yet to make a public appearance. Could this be the day that little North meets the world?

Jenner posted a picture on her show’s official Facebook page that might suggest that she’s going to be putting her baby granddaughter on camera for the first time. In the image, a smiling Jenner is seen holding what appears to be a tiny baby and the caption for the photo reads: “You never know who will stop by our show today! #WatchKris.”

Now that little North is exactly one month old, it could be the perfect time to finally meet the baby. Coincidentally, her grandma’s show also debuts the same day she turns 1 month old, which would make the debut even more perfect. Jenner has already opened up about the baby and shared details about her name, so why not let the little one make her first appearance on grandma’s show?

While it could be possible that the baby in Jenner’s arms in the Facebook photo is indeed baby North, it also seems a bit far-fetched. The chances of Kim Kardashian letting her infant daughter go on her mother’s talk show as her first public appearance seem a little slim. For a mom who’s been keeping her baby hidden from the world for a month, going straight to a TV appearance might be a bit much.

Whether the baby is actually little North, fans will just have to tune in to see — which was no doubt the entire point of posting the photo in the first place.

Is Kim Kardashian punking us with North West baby name? >>

Will you be tuning in to The Kris Jenner Show to see who the baby is?