Spoilers ahead! And, don’t forget: This episode takes place in August 2011 and December or January 2012. 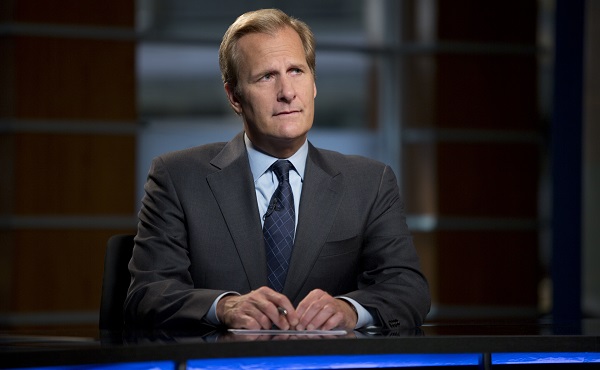 The Season 2 premiere of The Newsroom had a lot of cleaning up to do. When we left the News Night gang, things were a mess… or at least about to become one. Will had just called the Tea Party the “American Taliban,” Maggie had just accidentally professed her love to Jim. Sloan and Jim had a weird moment and Mac and Will were still in iffy territory. This episode followed two story lines: One from the time shortly after Will’s “American Taliban” comment and one four months later.

Maggie (Alison Pill) and Don are being sickeningly cute and Jim just can’t handle it. Luckily, ANC’s man on the Romney campaign broke his ankle in a fit of drunken stupidity. To escape Maggie and Don, Jim hits the road.

3 Things we learned about the media from The Newsroom >>

Jim and Will fit each other so nicely, though, and when Mac rolls in a new assistant to help in the meantime, Will isn’t happy. The assistant, Jerry, is a little too excited for nearly everyone’s taste. This is finally his chance at the big leagues and he immediately tries to use it to push his agenda and his people. When he calls in one of his own contacts to sit in on a panel about the military’s use of drones, the contact is a little overzealous. There’s absolutely nothing wrong with being pro-military and it’s understandable that he would want to value the American lives of pilots over the lives of unknown Saudis. But when Mac (Emily Mortimer) tries to convince Will to interrupt and play devil’s advocate, he just won’t do it. He lets it slide.

Why? It goes back to Will’s “American Taliban” comment. Despite the fact that it was Al-Qaeda who flew planes into the World Trade Center, not the Taliban, the backlash of his comments (so close to the tenth anniversary of Sept. 11) weighs heavily on Charlie. To help show some sensitivity and avoid further drama, Charlie asks Will to sit out doing News Night on the anniversary. While Will says it’s OK, it’s clearly not and he lets the adjustment jar him.

While Will (Jeff Daniels) may not have been stubborn enough to comment on Jerry’s contact and his points, Mac didn’t like the guest’s showy ways. She tells Jerry that from now on, he’s to stick with using Jim’s people. Something is clearly amiss with the man and Jerry, though. When Jerry tries to let him down gently, it seems as though Jerry calling him was supposed to be more helpful to his contact than to News Night. And when the man thinks his time on television is coming to an end, he tells Jerry he’s got some “presidency ending” information for him.

A complete look at The Newsroom Season 2 >>

Enter the lawyer (played by Marcia Gay Harden). During the episode, we witness Will and Mac roughly four months in the future as they spend time with a lawyer and, at first, it’s not entirely clear who she’s working for. She’s there to help the News Night gang recover from something awful. From the sound of it, the information from Jerry’s source is less than concrete and when the team launches into an investigative report, the fallout is major. 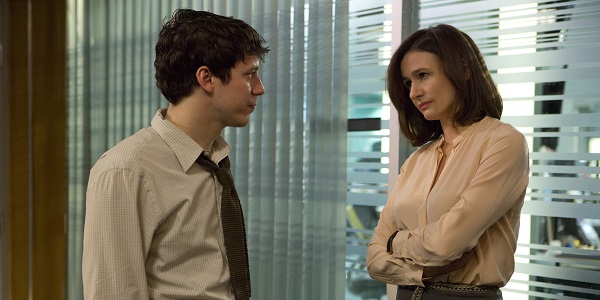 During the depositions, we see a future Maggie that is strikingly different than the one from August. In August, she’s the same dowdy little girl who is hopelessly in love with two men. Unsurprisingly (and quite thankfully), during the premiere, Don and Maggie break up. Even in 2011, everything ended up on YouTube… including Maggie’s infamous speech about being in love with Jim. Don, ever with the biting humor, bows out gracefully. While you’d think that would lead to happiness for Maggie, the future-Maggie is clearly recovering from something dramatic. When the lawyer shows unforgiving annoyance at Maggie’s edgy new look, Will scolds her. He won’t tell her exactly what happened, but he mentions that she went to Uganda to cover a story and things got way too intense. Whatever happened brings out immense sincerity and protection from Will when he tells the lawyer that if she had gone through what Maggie did, she would “kill [her]self every day.” Oh, my. Attacks (accidental and otherwise) on press are far from an unrealistic plot twist. Remember Bob Woodruff, Dan Eldon or Lara Logan?

While everyone else is dealing with the American Taliban and drone strikes, Neal (Dev Patel) is up against something about to be huge. We’re at the very beginning of the Occupy Wall Street movement and, like many other young Americans, Neal is swept up in the passion and call for change. The subtle picking at Occupy Wall Street’s flaws (asking for too much and not necessarily having a clear agenda) in an effort to better the movement instead of tear it down was well done. While Neal is smart enough to realize the flaws, it seems inevitable that he’ll continue to pursue the movement. In the Season 2 preview, Mac tells us Neal has been arrested and that most assuredly will be due to the Occupy protests.

Another big issue covered in the premiere is SOPA. Sorkin took an interesting spin on it, though. Instead of looking at it the way the general public looked at it or how even many reporters might have felt about it, the show looked at it from ACN’s standpoint. Approved.

Want more TV news? Sign up for the newsletter! >>

Yes, the sexism runs rampant in this episode. At one point, Charlie (Sam Waterston) refers to Sloan (Olivia Munn) as ‘money skirt.’ And, no, it doesn’t end there. While many take major issue with the way Sorkin handles women, it seems a bit like nitpicking and being overly sensitive. Sexism still exists. And sometimes, being sexist for the sake of being sexist is funny. When your boyfriend smirks and tells you to go make him a “sammich,” do you really get offended or do you laugh it off and tell him to make it himself?

All-in-all, Sorkin has set us up for another great season. We can’t wait to watch the next four months of 2011 unfold through the eyes of Will McAvoy and his team.