SheKnows had a chance to sit down with country star Jana Kramer and play a little game of “Would You Rather” — you know, where you’re given the choice between two scenarios and you have to answer which one you’d rather pick. Let’s play along and see if her answers match up with ours. 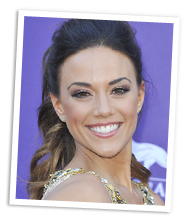 SheKnows had a chance to sit down with country star Jana Kramer and play a little game of “Would You Rather” — you know, where you’re given the choice between two scenarios and you have to answer which one you’d rather pick. Let’s play along and see if her answers match up with ours.

Would you rather do a duet with Whitney Houston or Michael Jackson?

Analysis: This is a tough one. I wish there was an option for both, but since we have to pick one, I think that I’d go with Whitney since if you had to perform it live, you’d have to be a really good dancer to do a duet with MJ.

Would you rather be cast in The Hunger Games or Fifty Shades of Grey?

Analysis: The Hunger Games is a known hit, and lead character Katniss Everdeen is such a strong character (whether or not she wants to be). Fifty’s lead female, Anna, is kind of weak and a bit whiny. Plus, my parents could watch The Hunger Games, but I’d be embarrassed if my mom and dad watched the “performances” in Fifty, so I’m going with Hunger Games.

Who would you rather give a toast at your wedding:
Amanda Bynes or Lindsay Lohan?

Analysis: I think that LiLo can pull it together long enough to have a coherent three minutes or so, but I’m not sure we can say the same for Bynes. Plus, with all the nose jobs she’s had and her penchant for wigs, how would you know what Amanda Bynes looks like these days? I’m going with LiLo.

Jana’s Answer: Do I have to pick one? Amanda Bynes. It would be crazier, probably.

Would you rather be styled for an event by Lady Gaga, or JWoww and Snooki?

Would you rather meet Kim Kardashian’s baby or Kate Middleton’s?

If you were on The Voice, would you rather be Team Levine or Team Christina?

Analysis: Adam Levine is certainly the more versatile of the two coaches. Christina would probably try to make her sing a pop song. Plus, Jana is a country girl and since Adam’s bromance Blake wasn’t a choice, Levine all the way.

Would you rather have been cast in Boy Meets World or Full House?

Analysis: Ooh. Another tough one. How could you pass up a character name like Topanga? Plus, Rider Strong was the name of one of the actors in Boy Meets World, which is totally cool. They’re also doing a remake/update of the show, so Boy Meets World looks like a strong contender. But let’s face it, with Kimmy Gibbler, Uncle Jesse, Joey, Comet, Danny, Becky, DJ, Stephanie and Michelle, it’s not even a contest. Cut. It. Out.

Would you rather elope or have it rain on your wedding day?

Analysis: While rain on your wedding day is not the end of the world, I personally want my friends and family there, so in the words of Jana herself, “I Hope it Rains.”

Would you rather take dance lessons from Shakira or Psy?

Analysis: I feel like they both can only do one thing. Psy can ride an invisible horse like a pro, yes. But Shakira’s hips have never ever lied, and she was a great coach on The Voice, so I’m going with Shakira on this one.

Would you rather the Chicago Blackhawks or Boston Bruins win the Stanley Cup?

Analysis: This is such a trick question, because you really have to be a hockey fan to have an answer. Being from Detroit, Jana is a big fan of hockey but the Red Wings aren’t an option, so since Chicago is closer to Detroit, Chicago it is.

Jana’s Answer: Neither. It’s just too soon. I can’t even talk about it.

Would you rather write a chart-topping song with Justin Bieber
or a personal song with an idol that doesn’t do so well.

Analysis: Doing anything with Justin Bieber would automatically make me pick the other option, but if we really look at it, you could write one big hit, invest the money you get, live off that income and do whatever you wanted to for the rest of your life. Sure, it’s selling your soul, but will.i.am does it and he laughs all the way to the bank.

What did you think of Jana’s answers? Did they match up with yours? Let us know in the comments below.