In this episode of The Killing, called “Try,” Linden goes on a long drive with Pastor Mike and as she learns more about him, Holder and the rest of the force go on the hunt to find them. 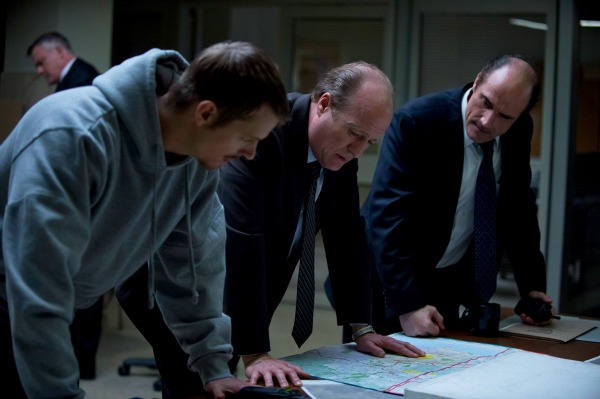 Well, the kidnapping of Linden (Mireille Enos) may not have taken up the entire episode, but that sequence was so intense it certainly felt like it did. From the moment the episode began with Linden’s shaky “Easy, easy,” it was clear she wasn’t going to get out of it easily.

Linden’s kidnapping was incredible to watch as we saw her and Pastor Mike (Ben Cotton) driving all over town and slowly revealing more and more things about each other. Even though he was painted as the killer in the previous episode, I had a feeling it might not be true. When the truth came out and he told Linden that he had in fact been helping the girls to detox, I barely believed it though. Until then, every word out of his mouth, every action he made, seemed to scream the opposite. But as he told his story, I slowly started to believe him.

The Killing Season 3, Episode 7 recap: Linden gets in deeper >>

Even though Pastor Mike wasn’t their killer, it didn’t mean Linden wasn’t in danger. Pastor Mike knew that the cops weren’t going to be inclined to believe him and you could sense that he was a man who had given up. Desperation like that makes a man do insane things and when he found that radio on Linden, I feared for her safety. As a viewer, I liked that they didn’t play Linden as a tough chick cop who was smart-mouthing her kidnapper as she waited for her friends to come rescue her. Linden did everything she could to give clues to Holder (Joel Kinnaman) and the rest of the team, but she had no way of knowing if they would get to her or what Pastor Mike would do. When she collapsed on that pier after they found her, I was right there with her and I appreciated that they let her show the fear that any normal person would’ve felt in that situation.

After Linden was safe, the show went back to Ray’s (Peter Sarsgaard) story. He asked his lawyer to meet him and wanted to know if the man had gotten ahold of Linden. Obviously she was busy, but the lawyer assumed her lack of communication meant that she had no more information for Ray. Instead the lawyer wanted Ray to concentrate on what should be done with his body after his death. With such a stark reminder of how close he was to the end, it was no wonder he had a panic attack. Bravo yet again to Sarsgaard for that performance. As someone who’s had a couple of those, I found his portrayal so real I could barely watch it.

In the end, Ray did get the chance to talk to Linden and told her that he could arrange for her to speak to Adrian. She’s convinced that Ray’s son knows something, so could this be the next crucial step in Ray going free?

As for Bullet (Bex Taylor-Klaus), she made an error in judgment when she told Holder that Lyric had called and said that Pastor Mike was in the woods. Like the boy who called wolf, when Bullet actually did have important information to tell Holder (like, say, the name of the killer), he angrily ignored her call. The final scene showed a sinister presence watching her in the coffee shop, seeming to indicate that the killer had discovered Bullet’s intentions. With time ticking away, will Holder answer his phone in time to rescue Bullet?

Pastor Mike claiming that he was the only one who could see what was going on inside the minds of the kids on the street. 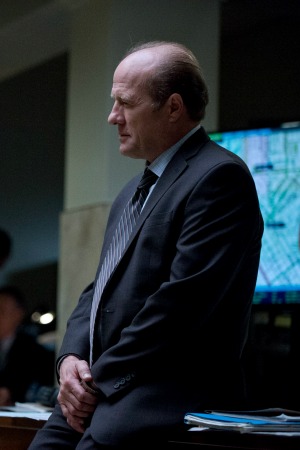 “Human garbage, these kids. No one cares. No one goes looking for them.”
“You do.”

Linden standing in front of Mike and telling him that if he forced the officers to shoot him, they’d carry it all their lives.

Linden collapsing onto the pier and Holder joining her and putting his hand on her shoulder.

The way Ray’s voice broke when he said he didn’t want to hang. That nearly broke me.

The guard talking Ray down from his panic attack. Wow.

That whole fight between Bullet and Holder.

Linden opening up to Holder about how scary it had all been.

Holder telling Linden that a candle in a ding-dong was more than his dad ever did for him. Ouch.

“Maybe it’s you who needs to let go of the past.”

Do you think Bullet could be the next victim of the killer?