In honor of Cory Monteith, we present our favorite memories and moments he gave us as Finn Hudson and as the kind, funny person fans will always remember. 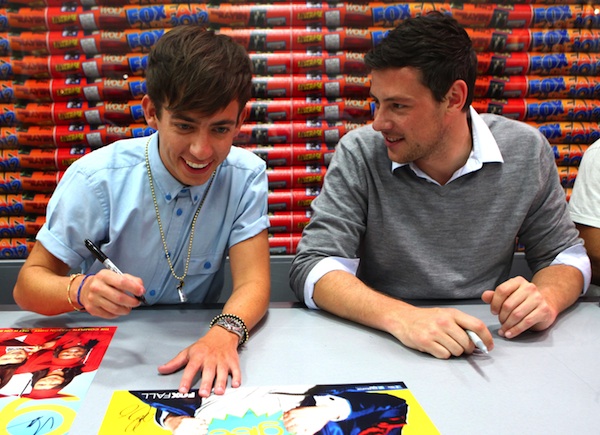 Cory Monteith will be missed by millions of fans across the world. He inspired those around him with his never-ending supply of kindness and humor. Monteith described himself on Twitter as “tall, awkward, Canadian, actor, drummer, person.” The last word we heard from Cory was on Friday, July 12, before his untimely death the following day. He was just 31 years old.

Just like many of you, we are heartbroken at the news. In honor of Cory, here are our favorite memories of and moments with the actor.

Watching this video of Cory and Rachel effortlessly serenade each other — with the perfect backup support from nearly every Glee cast member — is perhaps one of the most perfect ways to remember Cory Monteith. “We’ve Got Tonight” is on repeat for us all day today.

Beyond his Glee character, Cory was just a young adult hoping to get a big break in acting. He chased his dream and landed a beautiful actress for a girlfriend, but he never seemed to sell out to Hollywood.

RIP Cory Monteith. You left us too soon and will be forever missed.

Way back in 2009, when Glee first appeared on Fox, fans were curious to know just how the Glee cast auditioned for their unique roles. Cory Monteith chatted with People magazine, and his humility and ease in front of the camera made us love both him and Finn.

We get to see Cory and Lea Michele fall in love on screen — in parallel with their real-life romance.

Finn’s high school proposal to Rachel showed him at his most vulnerable moment in the entire series, and his heartfelt speech in which he calls Rachel his “beacon of light, guiding [him] through life” was a pivotal moment for both the characters and for Monteith and Michele.

Cory Monteith was a funny, kind, and down-to-earth actor whose overnight stardom on Glee never affected his remarkable ability to connect with fans. In several clips of off-camera and behind-the-scenes footage, we get to see the true Cory Monteith.

These moments will warm your heart.

Despite looking tired — and the rest of the Glee cast not being especially friendly — Cory went out of his way to chat with a pretty annoying photographer for several minutes as a crowd of paparazzi literally followed him all the way through the airport.

Monteith made jokes, treated the paparazzo with respect and even covered for his less-than-polite co-stars. Truly a gentleman.

Our heart goes out to all his family and friends who are no doubt struggling to handle the unbelievably sad news of his death.

“We’ve got tonight, who needs tomorrow?
Let’s make it last, let’s find a way.
Turn out the light, come take my hand now.
Why don’t you stay?”

Photo courtesy of B. Dowling/WENN.com