SheKnows had a chance to sit down with the 22-year-old country singer-songwriter to talk about her latest album Fall Into Me, writing about love at such a young age, and the dangers of touring in Wisconsin. 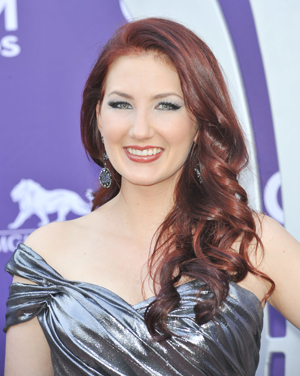 Even though country singer-songwriter Katie Armiger is only 22, she is on her fourth studio album. Released earlier this year, Fall Into Me shows a mature side for the Sugar Land, Texas, native who refers to the album as a diary of the past couple of years of her life.

SheKnows had a chance to talk to the singer who explained that Fall Into Me was a “labor of love.”

Chances are, if you’re friends with the country singer, you were probably a big inspiration for the songs on this album.

For instance, the song “He’s Gonna Change” tells the story of her friend who was in a toxic relationship. As much as Katie protested, her friend said, “He’s gonna change — you just watch, he’s gonna become a different person. I see something in him that nobody else sees.”

And while that makes for a good song, we had to know how it ended. “He actually did end up changing and she married him and I completely had to swallow all those words. That’s the exception, though.”

Taylor Swift takes us on tour with “Red” >>

Katie released her first album at age 15 and while the songs she writes today are still about love, she realizes that love at 15 and love at 22 are very different.

“When I was little, the songs that I would write about love were about the guy in my science class that I thought was really cute and he never noticed me and he didn’t like me. So to me that was heartbreaking and I was devastated.”

But even though a 15-year-old version of love isn’t as devastating as a broken relationship when you are older, Katie’s songwriting has looked at the authentic feelings behind each moment.

She explains, when you are 15, “You don’t know anything different. You don’t know what real heartbreak is so what you’re thinking is completely authentic and it is for you at that age.”

Now, she is writing about the same feelings, but the experiences are completely different, which has made her a better writer and performer.

“As you grow, you have these different life experiences. I would say that just listening to [my] songs in a seven-year period, you can hear a growth.”

And while she isn’t in a steady relationship right now, she said that she is still learning in her love life — both about love and herself.

“The biggest lesson [I’ve learned is] that love isn’t black and white. Sometimes you wish it was, but nothing is just right or wrong. Once you do fall in love, you realize you have to work on things. It’s not always easy and sometimes it’s really hard, but that’s what love is. “

Katie is coming off a marathon season of touring — including a 70-date college tour on top of her current tour. She doesn’t mind touring, though, because she loves traveling and meeting new people. There are always new cities and towns to explore and Katie and her crew always try to look for the unique spots that make a place special.

They also make it a point to eat locally and try local delicacies. While touring near some wineries netted her some great new wines, she came up against a bit of a problem in Wisconsin.

“We were in Wisconsin a lot so we ate a lot of cheese curds. Finally, we had to stop eating them because we couldn’t fit into our clothes before the shows.”

And while she has toured with a lot of big country stars like Brad Paisley, Little Big Town, and the Eli Young Band, she admits that it’s the team behind the artist that makes a tour great.

“The show with Brad Paisley was incredible because, of course, he’s a great artist, but also his team is so organized and they’re so on top of everything that it’s great to be around.”

And even though Katie has been touring like crazy, she’s not slowing down any time soon.

“There will be a lot of touring this year. I will be gone a lot. It’s going to be fun.”

Check out “Playin With Fire” — Katie’s latest single from Fall Into Me. Let us know what you think in the comments below.