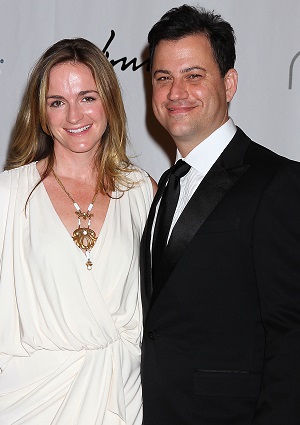 Jimmy Kimmel is having an amazingly good year. First, his show was moved into the coveted 11:35 p.m. time slot, and now… he’s a married man!

According to People.com, the Jimmy Kimmel Live! host’s rep has confirmed that Kimmel married Molly McNearney, his co-head writer, at a ceremony in Ojai, California, on Saturday, July 13. The 45-year-old host reportedly proposed to McNearney, 35, last year while on vacation in South Africa. Who knew the funnyman could be so romantic?!

This was McNearney’s first wedding but Kimmel’s second. Kimmel was previously married to Gina Kimmel from 1988 until 2002, when they were divorced. Kimmel had two children with Gina, but whether or not they attended this wedding has yet to be disclosed. While he didn’t marry comedian Sarah Silverman, Kimmel did date the hilariously potty-mouthed actress for seven years before they parted ways. After that, Kimmel and McNearney began dating, and it’s been smooth sailing ever since — at least to our knowledge.

We wish them the best of luck!

Want more celeb news? Sign up for the newsletter! >>