Who’s the good guy on Breaking Bad: Jesse or Walt? It kind of depends on your point of view. 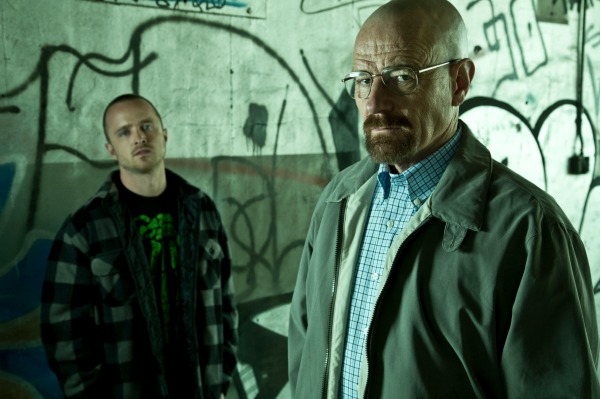 As Breaking Bad nears its series finale (the final eight episodes begin airing Aug. 11 on AMC), it’s time to step back and take a look at the show’s two main characters.

The series began when high school chemistry teacher Walter White (Bryan Cranston) discovered that he had inoperable cancer and, to give his family financial security without him, used his knowledge of chemicals to become a methamphetamine dealer. He enlisted the help of his former student Jesse Pinkman (Aaron Paul), and the two became business partners.

The question of whether Jesse or Walt could be considered “the good guy” really depends on your point of view — and on when you are looking at each of the characters. After all, both could be considered good or bad, depending on what situation they are in at any given moment.

Aaron Paul marries Lauren Parsekian: Who is his “pretty bird”? >>

Jesse as the good guy

When Walt found Jesse, he was basically a punk kid who’d gotten into dealing drugs. A person who deals methamphetamine is not necessarily a good guy, but over the show’s seasons, Jesse has shown that he does have a lot of heart. When he and Walt have been forced to do some truly heinous things, it’s Jesse who often seems to react harder. Yes, it’s true that Jesse is now part of an operation that has committed an immense amount of bloodshed, but would he have gone down that path if Walt had not led him there in the first place? That is the question to ask when deciding whether he’s a good guy or a bad guy.

Walt as the good guy

No one could really blame Walt when he made his decision to turn to drug manufacturing at the beginning of the series. The guy had just been told that he only had a couple of years to live, and he didn’t have a lot of options to ensure that his family would be taken care of after his death. As the years have gone by, though, it’s plain to see that he has been corrupted by the evil of his chosen profession. Yet, even as he descends farther down the rabbit hole, he can still be seen to be struggling here and there with his decisions. Yes, Walt has done some incredibly bad things in his new life, but his original intentions were good.