No, it’s not Lea Michele and Cory Monteith… yet. Rumors started to swirl this week that Glee newcomers Blake Jenner and Melissa Benoist are getting hitched. 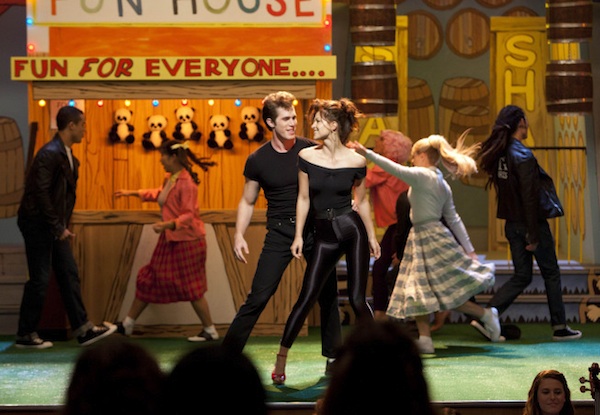 Hmm… we thought we sensed something more than just on-screen chemistry with these two. Though Blake Jenner, 20, and Melissa Benoist, 24, only publicly acknowledged their relationship a short time ago, Jenner has already put a ring on it, according to a source who spoke with Us Weekly.

During Season 4 of Glee, Benoist’s character, Marley, was torn between Jake and Ryder (Blake Jenner), but it looks like in real life, she didn’t have any trouble deciding what she wanted.

Jenner joined Glee after winning The Glee Project in 2012, while Benoist landed the role of the new female power singer for New Directions when Lea Michele‘s character, Rachel, headed off to college. Benoist and Jenner have been upgraded to series regulars for Season 5, so expect a lot more love triangle drama among Marley, Ryder and Jake when the show returns this fall. We’re sensing the tide is about to turn in Ryder’s favor.

In case the above statement didn’t clue you in, the two are staying quiet about the relationship. Their reps declined to discuss the personal lives of their clients.

We barely have pictures of the two of them together, let alone specifics about their dating life, but we’ll be sure to let you know when the details are spilled. She can’t hide that rock forever — at least, not if Jenner did a good job!

Are you surprised to hear Blake Jenner and Melissa Benoist are engaged? Is the romance destined to last, or are you skeptical?