He was a ’90s icon, and in 2013, he’s still making money in comedy. According to Forbes magazine, Jerry Seinfeld is the top earner among comedians. 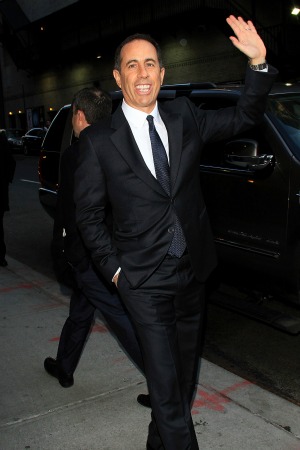 His iconic sitcom ended in 1998, but he still tops Forbes‘ list of highest-earning comedians 15 years later. Jerry Seinfeld is the man to beat when it comes to income power: This is the third year in a row that the funnyman has reigned supreme.

The business magazine measured the period from June 2012 through June 2013. During those 12 months, Seinfeld took home a hefty $32 million.

If you think that money is coming from syndication royalties from his sitcom, think again. He earned a large percentage of his income from over 70 tour dates during the last year. The ’90s show only gave him a small percentage of that towering total.

The financial periodical measured concert ticket sales as the main criterion for the comedians’ list.

Quite a few other familiar names made the list, including Louis C.K. and Kevin Hart, who have earned a sizable income on the comedy circuit over the last year.

Notably missing from the list are female comedians. Even though there are top-earning funny ladies like Ellen DeGeneres, Melissa McCarthy and Chelsea Handler, the women choose to focus their energies on TV and film versus the comedy tour.

Seinfeld’s current project is a web series called Comedians in Cars Getting Coffee. The comic interviews his peers while in the car… getting coffee.