The Jackson family gets handwritten notes from Michael Jackson and his children admitted into evidence in the AEG trial. 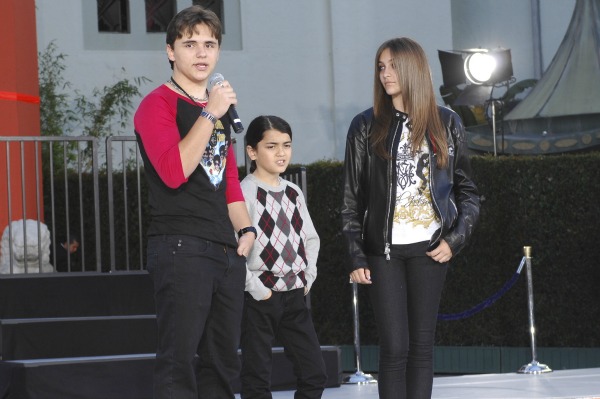 Michael Jackson’s nephew, Taj Jackson, testified in the family’s case against AEG Live this week and said that handwritten notes found by the Jackson family were indeed written by the King of Pop, the NY Daily News reports.

One note bore evidence of a tender conversation between Michael Jackson and his youngest son, Prince Michael Jackson Jr. (aka “Blanket”). In the note, Jackson wrote down what little Blanket had to say about what his favorite words were.

“Words of Blanket my son 6 years young,” the note began, scrawled in black pen on white paper. “What’s your favorite letters Daddy? Mine is ‘G’ for God and ‘D’ for Daddy.”

The jury was also shown another note that had been written by Jackson’s daughter, Paris, to her father. The note was written on lined paper in pencil and showed many marks from an eraser and multiple corrections as she worked to get it exactly right for her daddy.

“Dear Daddy, I love you so much & I’m so glad I got a goodnight hug,” Paris wrote. “Sleep well, I love you & good night. I’ll see you tomorrow! XOX Goodnight. Lots of love, Paris Jackson.” Paris even used a heart over the “I” in her name, as if to pour even more love into the letter.

The Jackson family fought hard to get the notes admitted into evidence, as they said the messages prove that Michael was a loving and caring father. The family believed that the notes also prove the immense loss that the family suffered from his death on June 25, 2009. They are suing AEG for wrongful death and claiming that the company negligently hired the doctor who caused Michael Jackson to overdose. AEG did not want the notes used and claimed that it was impossible to tell when or where the notes may have been written.

Michael Joseph Jackson Jr. (aka “Prince”) spoke at the trial back in June and gave chilling testimony about how his father cried after getting off the phone with AEG and told his son, “They’re going to kill me.”