It seems one member of the paparazzi has decided that when a 7-year-old doesn’t want to get her picture taken, it’s all right to yell at her and call her names.

Suri Cruise, as the daughter of two very famous parents — Tom Cruise and Katie Holmes, has had to 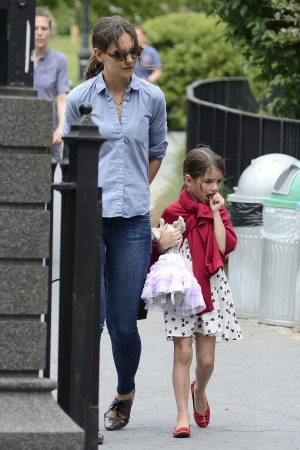 deal with pushy photographers all her life. This time she had apparently had enough. In a video recently posted by Fishwrapper, you can see that little Suri was walking with her mom and another little friend as they tried to get from what looks like a hotel to their car. As they got on to the sidewalk, they were surrounded by photographers as well as people shoving photos and papers in their way in attempts to get autographs.

Did Tom Cruise hire a body double for Suri? >>

Little Suri got angry at the people getting in her way and yelled at the crowd, saying: “We’re trying to get through!” and then “Stop it!” when they wouldn’t get out of the way. As Suri, Holmes and her mom entered the street to get to their car, Suri turned back to say, “Get out of the way!”

That’s when things got ugly. One of the photographers said, “Goodbye, Suri, you little brat.”

Sure, Suri wasn’t exactly nice when she asked people to get out of their way, but does that really give a grown man the right to take his frustration out on a 7-year-old?

Luckily, the other photographers agreed and quickly jumped on the guy verbally. One man could be heard saying, “Whoa, whoa, whoa!” when the photographer went off on Suri and, when the mean one tried to defend himself by claiming that Suri was a “b****” (really classy, this guy), he got further schooled by the crowd.

Is Willow Smith’s “Summer Fling” too grown up? >>

The same man who spoke up for Suri told the jerk that, when he becomes a father one day, he’ll understand that you just don’t talk to children like that.

One thing’s for sure, Suri is one tough little lady.