MasterChef proved muy caliente in its first episode after the Fourth of July holiday, thanks to a cameo by Eva Longoria and some spicy ingredients. In this week’s blog, Chef Graham Elliot gives us the juice on having the pretty Latina on set, losing a frontrunner and rocking his special wetsuit. 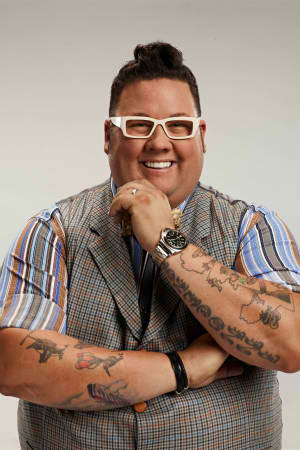 SheKnows: Seriously, how gaga were the guys over Eva Longoria?

Graham Elliot: Oh I think that they were all, you know, pretty sprung by her being under the mystery box — I mean, not knowing what it was going to be — I think you could tell from Eddie’s reaction and you saw a clip of Jordan giving James a look — I think they were all pretty excited.

GE: Yeah, and that shrimp was amazing! I think two big shrimp grilled off with the sauce drizzled on top is just so appetizing, you go, “I want to eat that.”

SK: Mmmm! With Bri’s advantage, she chose to single out Natasha. Had tension been brewing between those two prior to that?

GE: No, I don’t think so at all. Bri is probably one of the sweetest people that we’ve had on the show, just a great nature to her. And then Natasha is just super-driven, which — I think I talked about before because she is very skilled — it’s one thing to be labeled with having a bad attitude and it’s another when you can kind of back it up. She is a frontrunner, so who are you going to go after? You throw her the hardest thing and you see what she can do, so if it doesn’t take her down it just makes her look that much stronger in front of everybody.

SK: So, there has been so much press lately about the correlation between obesity and the cost of food. By saddling the home chefs with a basket filled with $5 worth of groceries from Walmart, are y’all trying to make a statement about how healthy gourmet food can be created on a budget?

GE: Yeah, absolutely. Whether it’s a big box retailer or a small farmer’s market, wherever you can go and access great, seasonal, fresh product, it’s a win-win for everybody. Canned, frozen foods, stuff like that — there’s a time and place for all of those thing but, again, when you can get something that is vibrant and delicious and beautiful and cook with it for under 5 bucks, there’s nothing better.

SK: Of course, the biggest shocker of the night was Lynn…

GE: Yeah, no one saw that coming! I think we were all kind of bewildered, like, “Why are we here having this talk?”

SK: I still can’t believe it happened… then again, I did tell my husband that Lynn’s dish kind of looked like the skin off an elephant’s knee. Did you ever expect that from him?

GE: No. I was talking to Gordon, and it’s like a classic French thing, where you kind of layer meringue — I don’t know. But it’s like, even if he’d nailed those, there was that mushy, gray banana that looked like it was cut and chopped up a week ago and left on the counter. Just the whole thing was terrible. You’d never expect it from Lynn, who makes such beautiful stuff.

SK: Krissi’s muffins didn’t look so hot either. What were they like?

GE: Those muffins were almost like little rubber balls — like eating an eraser or something. Putting gelatin mix into a baked good like that, you know, all it’s going to do is make it super dense and rubbery.

SK: And Lynn’s dish was still bad enough to beat out the rubber eraser muffins?

GE: Oh yeah. Because at least you could taste them and eat them and know there was something behind it, a substance. It was a very, very poorly executed muffin, but there was no excuse for what Lynn put up. I’m surprised that he even put it up! I thought that in that situation — and of course it’s easier to sit back and watch and say, “I would have done this” — puree it and top it with mint and say it’s a soup or something, you know? Putting that on a plate… that’s when you’re running out of time and scared and as soon as you do it, you probably think, “Alright, that’s it… I’m done.”

SK: He looked so embarrassed — I felt so bad for him. Hard to see him go?

GE: Yeah! He’s like the sweetest person in the world and he’s so talented, so it was painful to have that talk.

SK: On to better news, Jessie won the elimination challenge and got to be captain in the Surf City fish taco challenge. But I’m not sure how she even concentrated when you were, as James put it, taking it up another notch with raw sex appeal in your wetsuit…

GE: Yeah, what’d you guys think of that? (laughs) I love to have fun, if you don’t notice — any time to laugh is a good time. So instead of just, “Let’s have you guys on Jet Skis,” I was like, “Well, if we’re going to be in wetsuits, I totally want a flesh-colored wetsuit, and let’s have the tattoos on it!” And someone else said, “Well, what if we do this?” And all of a sudden it’s, like, “Let’s draw a six-pack and make it this hilarious thing.” So that was that whole deal.

SK: Was there anyone you were surprised was or wasn’t on Jessie’s team of “all-stars”?

GE: Well again, Bri — and I mentioned this last week with the wedding how I didn’t think it made any sense to leave her out — because I think she is really strong. It’s really hard at this stage. Everybody left now knows how to cook and do good stuff, so it’s hard to pick and choose, but I think that Jessie did a pretty awesome job of picking people. I think it comes to controlling egos when you are on a team like that too, but when you have James and Eddie and Natasha on the same team putting food out, you really don’t have an excuse to lose.

SK: And they didn’t, for which their reward was tickets to the MLB All-Star Game next Tuesday. Are you a huge baseball guy? Who’s your team?

GE: The Cubs! I’m a huge baseball fan, absolutely. Because my dad was in the Navy, I’ve been to all 50 states, so I’ve been to a lot of ballparks. When I was growing up I was in, like, a humongous nerd baseball-card-collecting phase. I was living in Maryland, so I was a huge Orioles fan, but I loved the history — I could tell you most anything about the staffing, everything about the Yankees player… so I’m kind of all over the place.

SK: I can’t believe y’all made them cook chicken three different ways during the pressure test. Did the fact that it was such a huge endeavor contribute to you guys not completely reaming them when the chicken was raw?

GE: Yeah. Looking at those chickens, especially the fried chicken, they were pretty big. But Krissi was able to nail it and I was able to do it in the time, so it’s obviously possible to do it. The challenge was part of being in a pressure test, so of course it’s going to be grueling. If someone can nail all three perfectly, that’s amazing. If someone nails two out of three or one out of three, that’s when you start differentiating and seeing who’s better than who. When you get something that there’s no real crust on it and it’s completely raw and the other is over-cooked and one is super-fatty and flabby, then you realize, “OK, out of this group, you are clearly the one that does not have the skill to move forward.”

SK: It’s getting down to the wire now. Will we see the competition get even more fierce?

GE: Yeah, well you didn’t even mention yet the polite discussion that was had before the pressure test. (laughs)

SK: Oh my God, Krissi and Bri! You know, I wasn’t too shocked to see Krissi lose her temper…

GE: No, but I didn’t know what was said in that room until I watched last night! I was amazed at Bri standing up and talking to Krissi that way.

SK: Totally… I didn’t realize Bri had that in her.

GE: I don’t think anyone did! I watch all the live Twitter feeds of everything as it’s happening, and it seems like half the nation kind of jumped up for joy last night. You know, with Krissi… everyone’s got their own background, their story, their history, their baggage, their pros and cons, you know? It’s just that hopefully everyone learns from it at the end of the night and tries to make themselves better. I guess that’s what you hope for in this instance — nobody wants to be around a bully.

SK: Not at all. Well, what’s in store for next week?

SK: All right, next week is a sausage fest… can’t wait to tune in!