In this episode of Graceland, called “O-Mouth,” Mike gets close to Bello and ends up on the trail of Bigfoot, while Briggs and Charlie’s case leads to some very serious consequences. 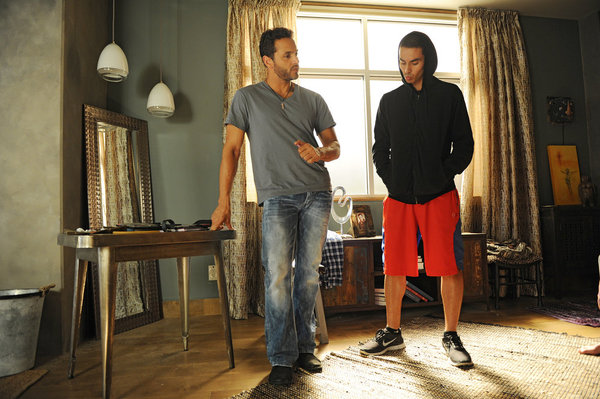 It’s just not an episode of Graceland unless somebody dies and one of the agents is put in mortal danger. Luckily there were some lighter moments thrown in between or this would’ve been a very rough 40 minutes of TV to watch.

Mike (Aaron Tveit) was doing his best to recover from watching a man blow his brains out in front of him and thankfully had a pretty nice distraction in the form of his new (kind of) girlfriend Abby. Oh, and a beach football game with Paige (Serinda Swan) in a bikini. Both seemed to help him a lot, but he wasn’t happy where his mission had led him and demanded to know more about why he was snooping on Briggs. That gave him the tidbit that Briggs (Daniel Sunjata) seemed to turn in less heroin than he caught on his busts, which was very interesting. Personally, I still think Briggs is not a bad cop, but the evidence is definitely starting to stack against him. Mike used all of his powers of persuasion (and an old Western movie) to get close to Bello and finally caught a break when he found out about the “Bigfoot” method that the dealers use to sneak drugs into the country.

Meanwhile Briggs and Charlie (Vanessa Ferlito) were on the trail of another dealer and had to adopt a couple of old aliases in order to do it. “Do it” being the operative phrase as it turned out that those two did have a mini fling once upon a time. With “Eric” and “Katie” brought out again, Paige was convinced they’d hook up again, but Johnny (Manny Montana) didn’t believe it. So they made a bet and sat back to watch what happened. Turned out Johnny was right, but it sure was close there for a minute.

In the end, Charlie had to resort to getting help from Whistler and he lost his life for it. Her reaction to Whistler’s death was just as hard to watch as Mike’s had been when he saw the other guy commit suicide. The last few seconds of the episode brought everything to a screeching halt when the dealer demanded that they prove they weren’t cops and Charlie proceeded to shoot up some real stuff and not the fake stash she and Briggs had brought with them. What will that do to her? Time will tell — seven days to be exact, as that’s when the next episode airs. 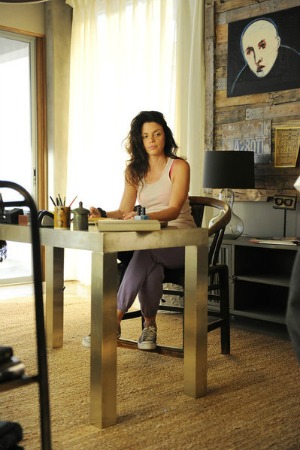 Mike agreeing that it was indeed worth it.

Wow, I totally believed Charlie shooting up for a second, there.

“You seen this mug lately? Euphoria’s its default setting.”

Paige’s reaction to finding out what Charlie and Briggs used to do to sell their cover.

Charlie and Briggs finding a way to keep Whistler from spotting them.

Paige predicting that Briggs and Charlie were going to hook up again. I am so with her on that.

Abby offering to take B.D. home for a spa and vet day. Aw.

Mike finding out that Briggs was always turning in less heroin than he captured. Uh oh.

Johnny informing Briggs and Charlie that he had a lot riding on them not hooking up.

Mike taking down the salesman. Nice!

Johnny freaking out as he heard Briggs and Charlie having a very intimate conversation.

Finding out that Bigfoot meant the drug dealers bringing in the drugs by submarine. Well, that’s a new one.

Q bringing out a gun to make Briggs use his stuff. Oh, man.

Charlie shooting up with the real stuff. Oh boy!

Want updates about Graceland sent to your inbox? Sign up for our SheKnows newsletters! >>

What did you think when you saw Charlie shooting up with the real stuff? Do you think she’ll be OK?