In this episode of Burn Notice, called “Exit Plan,” Michael changes gears and leads Sam and Jesse as they follow Sonya’s lead. Meanwhile, Fi learns the truth about Michael’s mission. 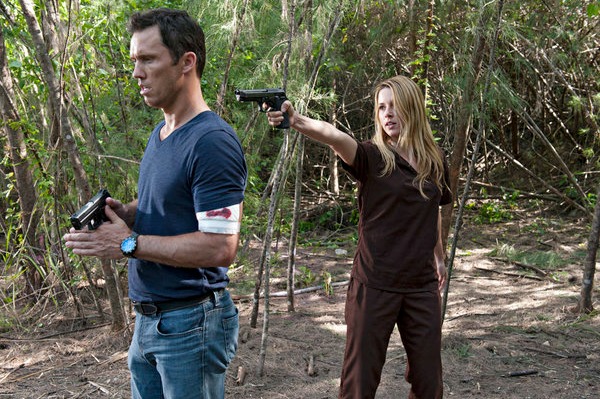 All that spy training has taught Michael (Jeffrey Donovan) to roll with the punches and he did that very well in this episode. Not that he actually got punched in this one (for once), but he sure did have to change directions fast. With Burke dead, Michael’s only lead to the terrorist network he’s trying to take down is Sonya. So he jumped on board her bandwagon and made Jesse (Coby Bell) and Sam (Bruce Campbell) go along for the ride, too.

The only thing that could be tricky in the future is the fact that Sonya doesn’t seem to be a completely bad person. Played wonderfully by Alona Tal, Sonya is one of those enemies of Michael’s that you begrudgingly start to admire after a while. When she talked about how she wouldn’t let herself be caught, I just assumed it was because she didn’t want to be tortured again (who does, right?). But it turned out she didn’t think she would survive it without giving up her people, and the last thing she wanted to do was betray her country. Michael already seemed to be getting in too deep with Burke, but what will happen now that he has to follow Sonya?

As for Fi (Gabrielle Anwar), you know I really thought when she found out how much pressure Michael was under and how his assignment affected all of their freedom, that she’d feel just a tad sympathetic. But other than a few tears, she didn’t seem to give a rat’s butt about him. Yes, sure, she decided to stay in Miami to protect the operation but I got the distinct impression she did that more for herself than Michael. I know he made her mad, but dang, that was harsh.

I still have no doubt in my mind that Michael and Fi will end up together… OK, so maybe I’m like 90 percent sure, but it’s obvious the writers are going to stretch out this fight between them. To make matters worse, they’ve also turned Carlos into a really nice guy, which is making it that much harder to dislike him.

Michael figuring out that their mysterious quarry had circled back behind them. Too bad he didn’t figure out she would jump down from a tree and put a gun to his head.

Sam talking to himself as they traipsed through the woods. 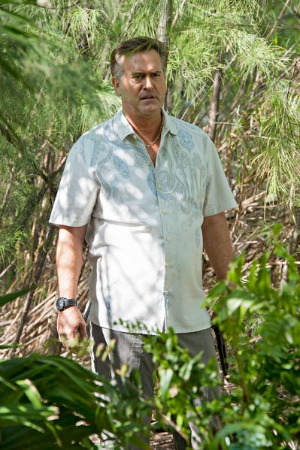 “The good news is that the boat is still there. We just can’t get to it.”

Sam suggesting that they throw Sonya in the trunk of a car and call it a day.

Sam asking for a thank you note and a fruit basket from the CIA when everything was over. Yeah, good luck with that.

Fi jumping all over Carlos when she thought he was lying.

“You can’t just walk away from this, Miss Glenanne.”
“No? Watch me.”

Sam and Jesse nonchalantly announcing that they were going to walk up to Oksana and start lying to her.

Chuck Finley partnering up with Virgil Tibbs. Love it.

Sonya busting out some Spanish. Nice.

Sam freaking out when he realized that Jesse was giving Oksana the exact location where Michael and Sonya were hiding.

Flying car. That is all. Wait. Make that two flying cars.

“So your theory was that I was noble?”
“Or just weak.”

“If I break, we lose everything and I won’t betray my friends.”

“Buy me some time. I gotta go make some bad things happen.”

Everyone pulling off the trick of making Oksana think Michael and Sonya were outside the police station. Brilliant.

The way Michael said, “Hello? Is anybody there?”

Michael referring to Sam as “the one with the chin.” That was beyond hilarious.

Carlos telling Fi he didn’t understand but he trusted her. Dangit show, don’t make me go and like him.

Sam and Jesse complaining about the plane ride home.

Do you think Fi will ever forgive Michael? What do you think will happen now that Michael is following Sonya’s trail?