Adam Sandler had quite a scare on a recent vacation to Africa. A cheetah pounced on the actor during a safari with his family. 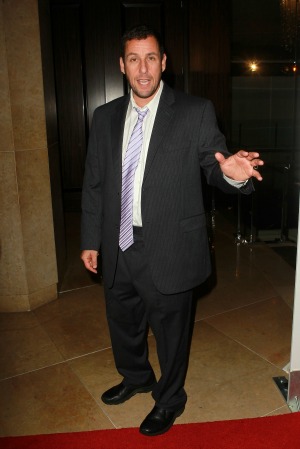 When you go on a safari to Africa, you expect to see incredible animals, not get attacked by them. But that’s exactly what happened to Adam Sandler on a recent vacation with his family.

He told the incredible story Wednesday night to David Letterman on Late Show. What makes the tale even more amazing is that the Grown Ups 2 star brought video footage of the event.

Our favorite bromance moments from actors who are BFFs >>

Sandler told Letterman, “This is a true story…there were very nice people at this place, and let me in with the cheetah and the owner said I could feed the cheetah water with my hands. So I did it, and something went a little bit wrong.”

The audience watched in amazement as the video clip was playing. The 46-year-old actor is kneeling before a pool of water with his hands cupped in front of him. Suddenly, the cheetah lunges towards his back. The handler quickly responds and pulls the animal away from Sandler.

The comedian revealed what he did wrong to the late night host.

He said, “What happened was, they said you were not supposed to bend that low with water.”

What is surprising about the video is how the funnyman reacted. He kept his cool the entire time. But Sandler shared what was really going on.

Letterman was the one who got the last laugh.

He quipped, “Not a bad way to go, honestly.”