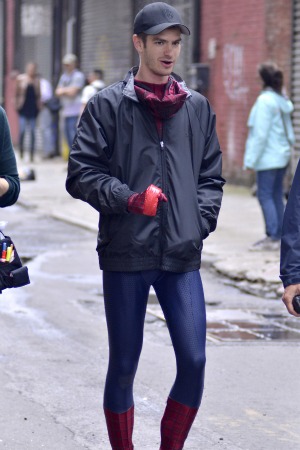 Officially, the story goes that Spider-Man falls in love with Mary Jane. But what if it was a dude that made his Spidey sense tingle?

Actor Andrew Garfield says it is entirely possible that Peter Parker, aka Spider-Man, could be gay. In an interview with Entertainment Weekly, The Amazing Spider-Man star said he recently had a conversation with producer Matt Tolmach about his theory.

“I was kind of joking, but kind of not joking about MJ [fans’ nickname for Mary Jane],” he told the mag. “And I was like, ‘What if MJ is a dude?’ Why can’t we discover that Peter is exploring his sexuality? It’s hardly even groundbreaking!… So why can’t he be gay? Why can’t he be into boys?”

Garfield already has another actor in mind to play his character’s love interest. “I’ve been obsessed with Michael B. Jordan since The Wire,” he revealed. “He’s so charismatic and talented. It’d be even better — we’d have interracial bisexuality!”

And apparently he has already discussed this in detail with director Marc Webb, because when Webb was asked about the possibility of a gay love interest by EW he said, “Michael B. Jordan, I know.”

Guess he’s heard that before.

Interestingly, all of the scenes with MJ have been cut from The Amazing Spider-Man 2, leaving many to wonder what the future of the character might be. Some fans think her storyline is merely being pushed back to the third installment to be respectful of what is rumored to be the demise of Gwen Stacy, played by Emma Stone.

We’ll find out when The Amazing Spider-Man 2 hits theaters in 2014.