Lamar Odom was filmed as he calmly and quietly destroyed cameras and other equipment belonging to a member of the paparazzi.

TMZ has posted what has to be the quietest and calmest meltdown ever caught on camera. The video 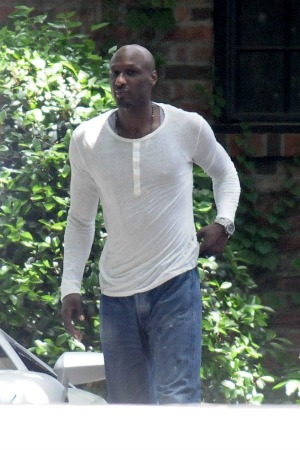 shows Lamar Odom calmly and methodically trashing the camera and equipment of a paparazzo. Apparently, Odom didn’t appreciate being bombarded with questions about Khloé Kardashian, and when the photographer wouldn’t stop, Odom resorted to the destruction to make his point clear.

In the beginning of the video, you can see Odom quietly sitting in his car enjoying some music when the paparazzo comes up to the window and starts shooting questions about whether Odom has been cheating on his wife. Finally, Odom decides that enough is enough and steps out of the car, telling the guy that he wants to talk to him.

The video quickly jumps to a shot of Odom carrying a bag that apparently contains the camera and equipment belonging to the cameraman. Through shouts of, “Why are you taking my camera, bro?” from the photographer, Odom calmly puts the equipment into what appears to be the trunk of his own car.

Unaware of the drama, a fan pulls up at this point and jumps out of her car to ask for a photo. Odom happily obliges, smiling as she holds up her cell phone and even letting her adjust his hat.

Once the fan leaves, you can see the photographer asking for his equipment back. Finally, Odom pulls it out of his trunk. The paparazzo then claims that, while he was a big fan of Odom’s before, now he’s not.

It’s doubtful that Odom would care about the loss of this “fan.”

What would you have done in Odom’s shoes? Do you think he overreacted to the photographer’s questions?