It is always good to see those who are in the public eye let loose and enjoy themselves. However, the Real Housewives of Beverly Hills star Brandi Glanville may have had just a tad too much fun. 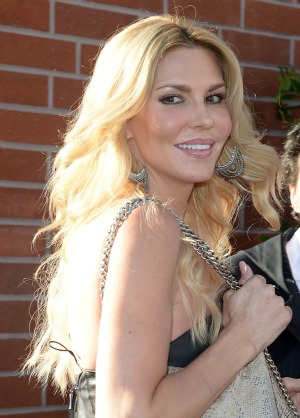 Countless photographs of Brandi Glanville‘s Monday night antics have been emerging on the web, which show her stumbling, disheveled, and accidentally exposing a little too much skin. They also show her suffering a wardrobe malfunction, and revealing her breast and black thong as she stumbled back to the London Hotel in West Hollywood.

According to Us Weekly, she was with her book agent Michael Broussard, who she tried to kiss during the evening’s events.

Real Housewives of Atlanta star NeNe Leakes will undoubtedly be very unimpressed by Glanville’s behavior. Leakes has previously stated, “Brandi’s just a train wreck. Just a wreck. Just a wreck,” and she continued to say, “She’s just off the chain, she’s off the hook [with] a lot of the things that she has to say, just so talkative.”

So it seems Glanville can add Leakes to her list of haters, which LeAnn Rimes tops!

So what does the Real Housewives of Beverly Hills star have to say about all of this? Well, she took to Twitter to explain, “I got drunk with my gays its not murder, everyone kept sending us drinks.I was being polite.”

She went on to say, “When ur PERFECT and make all the right decisions ALL the time, and don’t have at least a bit of cellulite on ur ass, get back 2 me.”

Well, at least she still has a feisty sense of humor! Perhaps she’s not the most eloquent person around, but she does have a point. It is “not murder” to allow yourself to let off some steam and enjoy a drink — or several in Glanville’s case — once in a while, right?

Glanville continued to address her fans and critics by saying, “It’s a new day can we please keep it positive.” She finished with, “I’m not perfect but I do the best that I can.”