LeAnn Rimes shows off a new, curvier figure, but the country singer — who admits to loving food — is immediately forced to defend her weight. 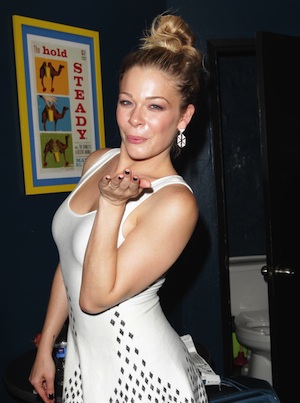 Did LeAnn Rimes gain weight? Quite the opposite, says the Rimes over Twitter.

Photos of Rimes surfaced in a widely known U.S. tabloid that claims she not only gained weight, but that her new figure is due to an impending pregnancy!

Rimes was not happy with the celebrity gossip magazine and blasted the publication on Twitter for its potentially deceptive photos.

Curvy celebrities who celebrate their shape >>

“LMAO Star Magazine! don’t know if you dr the pics or pic the worst one you can find, but I’m far from pregnant & just dropped a jean size.”

A rep for Rimes went ever further and released a statement that the Spitfire singer is “absolutely not pregnant.”

Curiously, the story the tabloid featured vanished from its website, leaving no evidence of its pregnancy claims.

Most shocking, it’s a far cry to call Rimes pregnant simply because she looks healthy (and that’s with the extra pounds the camera adds). No reasonable person would believe Rimes and Eddie Cibrian are expecting their first child simply based on the way the country singer looked earlier this week (see top right).

In fact, Rimes often uses her Twitter account to send out photos of food she’s eating — all low-calorie items such as including salads and salmon, save for an occasional alcoholic indulgence.