Love is in the air for Jesse Eisenberg and Mia Wasikowska, who were spotted kissing by the paparazzi on Tuesday. The former co-stars found love on the set. 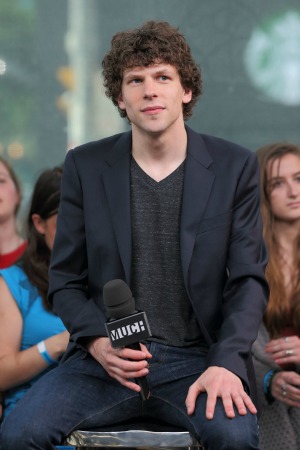 Summer love is in full bloom for Hollywood celebrities. For this new couple, their PDA was a bit of a surprise since they are both notoriously private about their personal lives.

On Tuesday, actors Jesse Eisenberg and Mia Wasikowska were photographed smooching in Toronto, Canada. The couple had been spotted recently holding hands, but this officially confirms their coupledom. People magazine shared the sweet photo.

The Now You See Me actor was definitely keeping it casual in his blue T-shirt and sneakers, but Wasikowska looked adorable in her blue-and-white polka-dotted outfit. The two met on the set of The Double, which is set to be released later this year.

According to IMDb, the film is “a comedy centered on a man who is driven insane by the appearance of his doppleganger.”

The 29-year-old actor’s private life is rarely reported on since he generally keeps a low profile in Hollywood. He was last linked to longtime girlfriend Anna Strout, who works for a nonprofit organization in addition to pursuing her acting career. Although no breakup was officially announced, it is believed they split sometime in the last year.

As for the 23-year-old Australian-born actress, very little is known about her personal dating life beyond Eisenberg.

These two better get used to the paparazzi’s lenses now that they have officially been spotted as a couple. The price of fame isn’t always easy for young Hollywood love.