Halle Berry and Olivier Martinez are reportedly tying the knot this weekend. 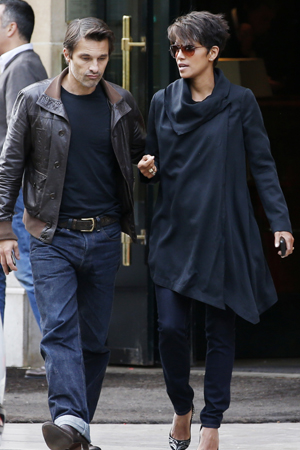 It looks like there’s a reason why Halle Berry and Olivier Martinez high-tailed it out of Los Angeles on Wednesday morning… they’re reportedly getting married this weekend, according to E! Online.

E! didn’t provide any other details about the wedding — and we don’t expect the pregnant actress or her French beau to comment on it until it’s a done deal.

Berry did reveal a few details in a recent interview, telling InStyle that it will be “very small.”

“I haven’t been to many weddings, but I went to one this weekend with 250 guests,” she told the magazine. “I thought, wow — so this is a wedding, huh? I’ve never had that, nor have I wanted that. I wasn’t even trying to catch the bouquet!”

The marriage will be Berry’s third marriage — and Martinez’s first.

“[She] had given up on being married, but she trusts Olivier. He makes her feel safe,” a source said in 2012 after they confirmed their engagement.

Safe enough to fight Berry’s baby daddy, Gabriel Aubry, in a now-infamous Thanksgiving 2012 throwdown. We’re really pulling for the couple though, especially since they’re expecting a baby boy later this year. The actress isn’t worried, she told the New York Times’ T magazine that she’s figured out why her other marriages didn’t work.

“My picker’s broken,” Berry told the magazine in 2012. “God just wanted to mix up my life. Maybe he was thinking, ‘This girl can’t get everything! I’m going to give her a broken picker.'”