Bobbi Kristina Brown’s engagement to Nick Gordon is back on, and she wants us to know there’s nothing sordid about it. 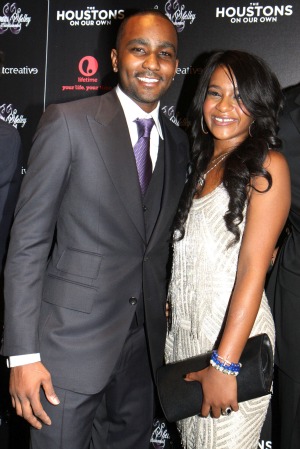 Bobbi Kristina Brown says her engagement to her kinda-brother, Nick Gordon, is back on, and she says we need to STFU about it.

Gordon was taken in by Whitney Houston at the age of 12 after his own family fell apart and raised him alongside Bobbi, with the two calling each other “big brudder” and “baby sis” on social media and Houston often referring to him as her son.

The couple announced their engagement in October 2012, months after Houston’s death, to a collective “Ewwww” from the public. They broke up just a month later, then at some point in the next few months moved back in together before starting a feud with their neighbors and finding new digs.

Now Bobbi says the engagement is back on, and we can keep our incest whispers to ourselves, thank you very much.

“YES, we me nick [sic] are engaged,” Bobbi wrote on Facebook. “I’m tired of hearing people say ‘eww your engaged to your brother’ or ‘if Whitney was still alive would we be together or would she approve of this.'”

“Let me clear up something, we aren’t even real brother and sister nor is he my adoptive brother. My mom never adopted him. In fact, mommy was the one who even said that she knew that we were going to start dating.”

“My mom knows me better than any of you,” she continued. “A lot of ya’ll are saying that ya’ll are only saying this all out of love. Which is bull because if that was so, all you would want is for me to be happy.”

The couple has yet to announce a wedding date. Since she skipped her father Bobbi Brown’s wedding, we wonder if he’ll be a no-show to her special day too.