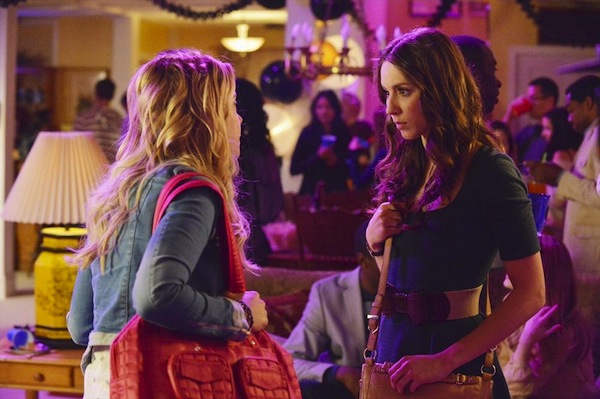 It’s admission season on Pretty Little Liars, and the girls are feeling lightheaded, but is it from the pressure or the alcohol?

Spencer’s mother makes an appointment for her with a private admissions counselor named Brendan who’s going to help Spencer (Troian Bellisario) get into college. Spencer calls him her Ivy League pimp. (Yeah, we know your minds were wandering thanks to our title.)

The girls stumble upon the phone number the parrot was singing. The first six digits match Cicero College.

Aria (Lucy Hale) goes to talk to her mom. Ella tells her she’s changed her mind about the trip and plans to tell Zack she can’t go. Ella talked to Mike, and he still isn’t over the divorce. Her mom gets into her car just as Aria receives a text from A that says, “This is the first taste of my venom.” Then a swarm of bees flies from the vents of her mother’s car and attack Ella.

Don’t worry, she’s fine. A couple of anti-inflammatories later and Ella’s back on her feet. But the attack only makes Aria want to protect her mom even more.

Aria confronts Mike about ruining her mom’s trip. Mike says the only reason Aria wants Ella to go on the trip is so she can get back with Ezra. 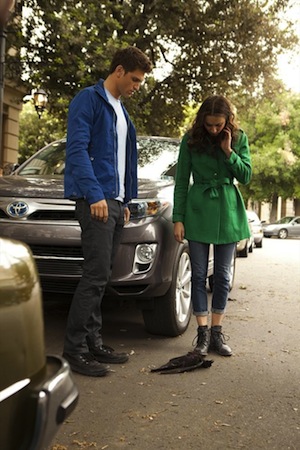 Emily (Shay Mitchell) meets Brendan before Spencer arrives at the coffee house. Brendan advises Emily to rebrand herself in order to get accepted to a variety of colleges. He clearly likes her and offers to go through some schools with her until Spencer shows up.

Spencer makes a meeting to visit Cicero with Emily only so they can snoop for information about the phone number. Brendan says it would be best if he came along, much to Spencer’s dismay.

Meanwhile, Spencer’s mom Veronica meets with Ashley to talk about Wilden. Veronica offers to look into the police investigation for Ashley.

Later that night, Ashley gets a call from Veronica, and Hanna (Ashley Benson) eavesdrops. Veronica asks Ashley to come to her office in the morning to discuss something important. Hanna gets suspicious all over again and begins snooping.

She picks the lock on her mom’s closet. Inside, Hanna finds a bag with a gun. Hanna calls Spencer, but Spencer hangs up the phone claiming to be really busy at Cicero before Hanna can tell her about the gun.

Aria asks her dad to convince Ella to go to Europe with Zack and, surprisingly, he does.

Emily wants advice from Brendan on how to get a sorority scholarship when she and Spencer visit Cicero. Spencer is all game plan, but Emily is actually interested in seeing the campus. Spencer asks a guy about the number and he’s able to identify that it came from Greek Row. Spencer is focused on finding the owner of the phone number, but Emily wants to enjoy herself and talk to sorority sisters about a scholarship. One she talks to tells her about their house mother Mrs. Grunwald who was fired for an unknown reason.

Hanna goes to meet Spencer and Emily at Cicero and brings the gun with her to the sorority party they’re at (because that’s a great idea). Spencer at least has the brains to tell her they need to leave. She goes to get Emily so they can go hand the gun over to Hanna’s father. While Spencer’s looking for Emily, she finds a strange room in the sorority house. It leads her to an old radio and phone. Spencer plugs in the phone and discovers it’s the same number the parrot was singing.

Spencer finds scratch marks on the backside of the door as if someone were locked inside.

Emily sees Hanna leaving the party and goes after her. Brendan follows Emily and tries to hold her hand, but Emily explains that she’s a lesbian and apologizes for giving him the wrong idea.

Hanna is burying the gun in the woods. The police catch her in the act, which is really strange since they drag her back through the party of drunken college kids and don’t say a word. Why would the police walk through an underage party and be more concerned about finding a random girl in the woods instead of breaking up a party with a bunch of kids. They sure weren’t that nice in Phoenix. Just sayin’.

At the end of the episode, we see A wipe off a dusty photograph of the Gamma girls with Mrs. Grunwald standing in the center.