Steve Grand isn’t your typical up-and-coming star. He works for tips at a hotel in downtown Chicago, plays piano in churches on Sundays and, with one of the hottest YouTube videos around, may be the next Justin Bieber — if it wasn’t for one thing… 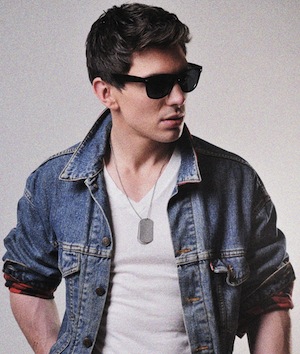 With over 700,000 views and posted only a week ago, Steve Grand has one of the hottest music videos on YouTube.

He has no music label, he maxed out all of his credit cards to make the $7,000 video and the 23-year-old could just be the next Justin Bieber.

Except for one thing: he plays country music.

The video for Grand’s song, “All-American Boy,” begins the day after an amazing country bonfire in the boondocks — the bonfire is going out, cups are strewn all over the grass and our hero Grand (looking like he stepped out of an Abercrombie and Fitch catalog) is pensive and alone thinking about the night before.

What happened, we wonder. What girl in her right mind would break this cutie’s heart?

Then we see Grand remembering the bonfire in the boondocks with a whole bunch of gorgeous 20-somethings.

Grand notices a girl talking to a guy that we can only assume is her boyfriend. Grand takes a swig of whiskey from a flask while the girl walks away.

The boyfriend gets up, walks over to Grand and starts chatting him up while Grand sings, “the way that shirt hugs your chest boy, I just won’t forget.”

Oh, right. Grand could be the next Justin Bieber except for two things: he plays country music and he’s old enough to legally drink.

The two guys and the girlfriend hang out the next day cruising in an old convertible. The boyfriend, probably hungover from the night before, falls asleep with his head on Grand’s shoulder.

Finally they stop and the girlfriend, tired of being ignored and feeling like a third wheel, takes off in the car and leaves the guys to fend for themselves in the boonies.

They walk back, talking, laughing and drinking and decide to go for a swim in the lake. The boyfriend strips down, playfully throws his shirt at Grand and jumps in the water.

Grand summons his courage, strips, jumps in and, without warning, gives the boyfriend a kiss.

And I guess I forget to tell you the other reason Steve Grand can’t be Justin Bieber — Grand writes his own songs.

In one of the most painful and heartbreaking silences ever in a music video, we come to learn that all of the signs Grand picked up on weren’t signs at all.

The boyfriend pushes Grand away and they just stare at each other trying to process what happened.

We’re back at the bonfire now. Boyfriend and girlfriend are dancing when Grand comes up to apologize. Boyfriend plays it off like nothing happened.

But something did happen for Grand. And while everyone goes and watches fireworks, he is left to remember those signs: the falling asleep on his shoulder, the playful hits, the skinny-dipping.

Check out The Civil Wars’ heartbreaking “The One That Got Away” >>

All-American Boy is country music at it’s most formulaic — a love lost to another and a broken heart all against the backdrop of a summer bonfire. It is sweet and yet Grand’s voice is so passionate and raw that we feel every pain he must endure.

Because let’s face it, who hasn’t been there? Who hasn’t had a crush that wasn’t reciprocated? Who hasn’t longed for someone else’s significant other?

So there you have it. Check out Steve Grand’s “All-American Boy” video below, because the way his video is blowing up the internet, Steve Grand could be the next Justin Bieber.

Now that you’ve checked out the video, let us know what you think of Steve Grand’s “All-American Boy.”