Captain America: The Winter Soldier is heading to San Diego Comic-Con. In preparation for the annual event, Marvel’s unveiled a new promo poster. 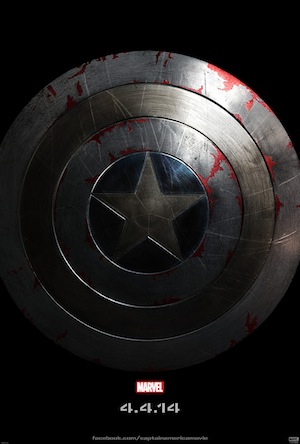 Marvel Studios is starting to roll out their Comic-Con promotion art. First up, they’ve released a teaser poster for next year’s Captain America: The Winter Soldier. It’s a sequel to the 2011 hit starring Chris Evans as the patriotic superhero. This time around, the story will shift focus from his origin to one of his greatest enemies — the Winter Soldier.

In both the comics and film, the new villain’s real identity is Bucky Barnes. He previously appeared in Captain America: The First Avenger and was played by Sebastian Stan who reprises the role. The character was originally declared dead but returns as a lean, mean assassinating-machine. It’s no more Mr. Nice Guy for him.

In the sequel, Steve Rogers (Evans) is still struggling to adapt to present day. Thankfully, fellow Avenger, Black Widow (Scarlett Johansson), is there to lend him a hand. He’ll also be joined by S.H.I.E.L.D. director Nick Fury (Samuel L. Jackson) who is invested in stopping Bucky.

The new movie poster features a close-up of Captain America’s shield. It’s tattered and worse for wear, which could signal his upcoming battle. Marvel is expected to premiere the first footage from the film at Comic-Con. Attendees will get to see how bad Bucky really is and whether Cap is strong enough to take him down.