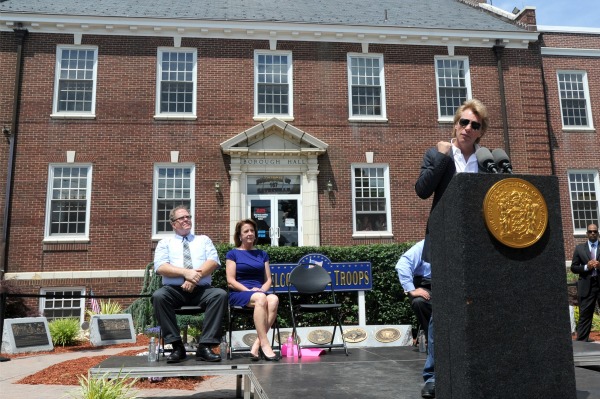 A hometown boy helps his hometown in a time of need. Jon Bon Jovi gave back to the state that has given him so much. On Tuesday, the rocker donated $1 million to the New Jersey Hurricane Sandy Relief Fund.

The charity is run by the state’s First Lady Mary Pat Christie to aid relief and recovery efforts in the Garden State after last fall’s devastating hurricane. New Jersey Governor Chris Christie accepted the check that was given on behalf of the band and Bon Jovi’s wife Dorothea.

The 51-year-old musician said at the ceremony, “My being here is not political, it’s emotional. I grew up here. I went to school here. I met my wife here.”

The presentation was done at the Sayreville Borough Hall where Bon Jovi reminisced about playing shows there in his younger days. He remembered thinking it was “the big time.”

He joked, “Returning home is humbling.”

Post-Sandy, the singer visited the area and comforted residents as best he could, but at times he felt helpless seeing the devastation. He also played in the NBC telethon that brought in $23 million to help victims of the natural disaster.

“One thought came to me,” he said. “What can I do? One of the residents responded, saying, ‘Use your voice.'”

The band is currently promoting their new album Because We Can with a North American tour. Their next city is Chicago on July 12, but the boys will be playing at home on July 25 and 27 at the MetLife Stadium in East Rutherford, New Jersey.