Ten years after he burst on the scene with “I Don’t Want To Be,” Gavin DeGraw is back with new music, a new album and some new looks on life. 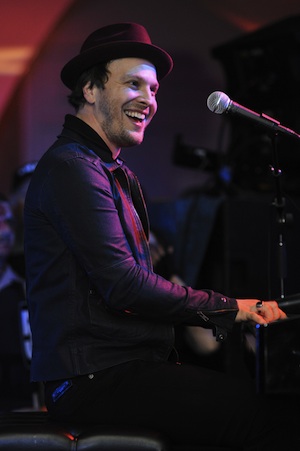 It’s amazing how a song that’s 10 years old can define a career.

And ten years later, Gavin DeGraw still isn’t trying to be anything other than himself.

While his sound has changed a bit, you can hear those same ideas of self-confidence, humor and distrust of the social norm in his new song, “Best I Ever Had.”

With a Mumford & Sons feel which he calls “Americana,” DeGraw explains that the song is “really nutty ride lyrically. There are a lot of socially conscious lyrics in there.”

He sings, “Night sky full of drones, this neighborhood of clones, I’m looking at the crowd and they’re staring at their phones.”

But don’t call him cynical. Degraw explains that the lyrics are more everyday observations that “people can relate to. It’s my job to reveal myself in the music and let people decide if they like it or not.”

And there is much more where that came from. DeGraw is putting the finishing touches on his next album which he has temporarily been calling Make a Move.

Due out in September, DeGraw explains that there are little fragments of that Americana sound throughout the new album. “The album is very diverse as far as sounds go and styles go but that’s the kind of record I like to make.”

As a songwriter used to working alone, DeGraw gave himself an extra challenge on this album — all of the songs are co-written.

“When you are writing alone, if you get a snag you just start writing a different song and think you’ll get back to that one later at some point and you’ll never finish. It’s more motivating to sit in a room with someone else and have them keep you paying attention to the task at hand.”

Britney Spears says her new album will be “most personal ever” >>

As for what’s on his summer playlist, DeGraw says, “I’m not too persnickety. I like something that’s good. It doesn’t matter what style it is.” Some of his favorites right now include One Republic, Maroon 5, Usher and Lady Antebellum.

“I’m also loving this Justin Timberlake single with all the chords [“Mirrors”]. It’s epic and the album version is like 10 minutes long. No one does that anymore.”

But don’t ask him to pick one favorite song of his. “Different songs mean different things to you.” Among his favorites, DeGraw mentions “I Don’t Want to Be” (“I love because it paid off my college loans”), “Not over You” because he said it revived his career in a great way and his new single, “Best I Ever Had,” because he sees the potential in it.

Check out the video for Justin Timberlake’s “Mirrors” >>

DeGraw gained many new fans while he was a contestant on Dancing With the Stars. Paired with Karina Smirnoff, DeGraw left the contest almost halfway through, but had a great time.

Degraw signed up for the show as a dare with his racecar driver buddy, Brian Dickers. “He said ‘if you do it, I’ll do it’ and I said, ‘ok, I’ll do it.’ He bailed out the next week.”

But now that DeGraw has gotten a taste of the Hollywood life, he says that he wouldn’t mind trying some more acting or perhaps voiceover work. “I think everyone in the entertainment business wants to branch out and do a different thing.”

But one thing he’s not doing right now is dating. Earlier this year, DeGraw was reportedly dating fellow singer/songwriter Colbie Caillat. But evidently that romance has fizzled. “I’m a little bit too busy for dating and a little bit afraid of failure.”

Well then, thank goodness he has a successful career as a singer/songwriter.

How did Gavin DeGraw balance touring and DWTS? >>

Along with his new album and his possible acting career, DeGraw has been working with Folgers Coffee to find the next version of their iconic jingle.

Folgers held a nationwide contest where people could submit their take on the “The best part of waking up… ” song.

As spokesperson for the contest, DeGraw announced the winner — North Carolina’s Sawyer Frye. Said DeGraw, “I think it’s a really good indication of the kind of talent that’s out there floating around that hasn’t been discovered yet.”

You can hear Sawyer’s winning version of the song at http://www.folgerscoffee.com/folgers-jingle/

Check out Gavin’s new single, “Best I Ever Had,” and let us know what you think in the comments below.