Kristen Stewart can’t seem to catch a break this week. First her truck is vandalized and now rumors are popping up about how she’s not doing well after the breakup from Robert Pattinson.

Poor Kristen Stewart isn’t having the best week, and it’s only Tuesday. The Huffington Post reports that 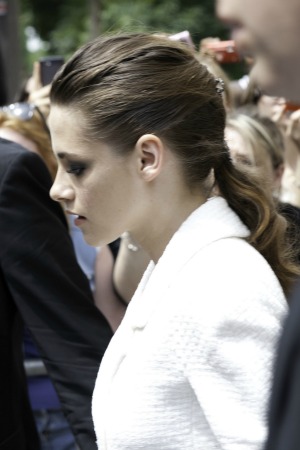 Stewart was out shopping when she came back to find that some cruel prankster had decided to leave her a nasty surprise. Written in the dust on her blue pickup truck’s hood Kristen found the message, “I love Rob,” (the “love” done with a heart). Whether the jokester meant that they themselves loved Rob (obviously referencing Robert Pattinson) or that they though Kristen was still in love with her former Twilight co-star, no one can say for sure.

2013 Celeb superlatives: Most likely to have a mental breakdown >>

Had the truck not been dirty and covered in dust, perhaps the trickster wouldn’t have taken the cheap shot, but who knows? The photos also show what could be a parking ticket under her windshield wiper. If that’s the case, then it’s just adding insult to injury.

As if the vandalism to her truck weren’t enough, rumors are surfacing that the actress may be taking her breakup with Pattinson harder that it first appeared. Apparently Star Magazine is reporting that a close source to Stewart has opened up about the difficulties Stewart is facing after the breakup.

“Kristen’s been trying to have a good time, but it’s difficult while Rob’s on her mind,” the insider reportedly said. “She can’t be bothered to eat and the weight is dropping off her. She’s not in the best place right now and saying she can’t cope without Rob.”

Even a new tattoo apparently wasn’t able to help. “She put on a brave face and got her first tattoo while in Nashville to try to get into the spirit of the trip, but nothing seemed to cheer her up,” the source revealed.

Just last week, Stewart was seen stepping out in Paris and looked to be having a great time as she flaunted a bunch of new fashions. Could it be that all of that was an act to make people think she was doing better than she is?