Amanda Bynes makes a splash at her latest court hearing in a wacky aqua-blue wig.

Amanda Bynes showed up for her court hearing on Tuesday wearing an aqua-blue wig. Why the wig and 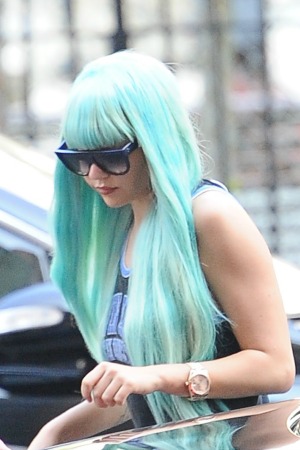 why was it blue? Only Bynes knows for sure. She hasn’t yet tweeted about why she chose to wear a blue wig to court, but she sure has been vocal about her broken nose (caused by plastic surgery). There have been no less than four tweets about her nose since last night.

As for the court hearing, Bynes was there regarding the charges she received back in May for reckless endangerment, tampering with physical evidence and physical possession of marijuana. Bynes got in trouble when the doorman for her building spotted her smoking marijuana in the hallway and called the cops. Miss Bynes didn’t take it too well when the police arrived and she showed her frustration by throwing her bong out the window — not exactly the way to prove your innocence.

Things have been going steadily downhill for the “retired” actress since then. Not long after she faced those charges, she began using Twitter as her own personal weapon against anyone she didn’t like. She started out her now-famous “ugly” tweets with Rihanna, then moved on to other targets like Courtney Love and, most recently, the Obamas.

All of the craziness had some wondering whether or not she was faking it, as one so-called friend of Bynes claimed to the world. If she is pretending, she’s doing the best acting job of her life.

Amanda Bynes and Cher have it out on Twitter >>

In fact, Bynes has been doing such an amazing job at being a troublemaker, that we at SheKnows have nominated her as one of Hollywood’s biggest troublemakers. Be sure to check out the article and cast your vote if you think she should win.