Nigella Lawson is reportedly upset that her husband, Charles Saatchi, wants a divorce after their “playful tiff” was caught on camera. 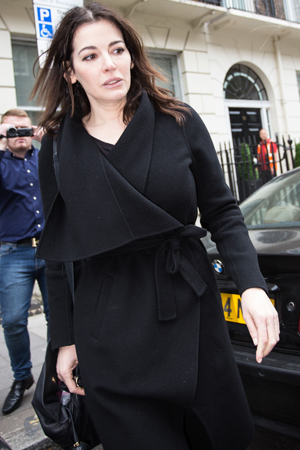 Nigella Lawson moved out of the London home she shared with husband Charles Saatchi in the fallout surrounding their domestic assault scandal, but she never expected that he’d end things permanently.

“She moved out, she needed a break, she needed to think, to be apart from him, but in no terms did they break up or even discuss the D-word,” an insider told Us Weekly of Saatchi’s abrupt divorce announcement over the weekend. “She didn’t expect him to pull this move.”

Their “break” came after the Saatchi & Saatchi ad executive was photographed with his hands around the Food Network star’s neck during a restaurant outing in June. British authorities cautioned him over the incident and Lawson moved out with her two children, Cosima and Bruno.

Apparently he’s not interested in fixing anything. Saatchi told the U.K.’s Daily Mail that he’s disappointed that Lawson didn’t defend him in the fallout from their so-called “playful tiff.”

“I feel that I have clearly been a disappointment to Nigella during the last year or so, and I am disappointed that she was advised to make no public comment to explain that I abhor violence of any kind against women, and have never abused her physically in any way,” he told the paper.

“I am sorry that we had a row. I am sorry she was upset,” he said. “I am even more sorry that this is the end of our marriage.”

“Their family is falling apart, and she can’t control the situation,” the source revealed, adding that she’s most worried about her two children.

“She’s worried about how this is going to play out,” the source continued. “All she can do now is look after the children and make sure they don’t get hurt in all of this. They are the most important people in her life.”

Will this turn into a messy divorce? It certainly seems to be setting up that way.