Nicki Minaj is Marie Claire‘s new cover girl. Among the revelations? That she wanted to be a lawyer — and she likes to pet men. 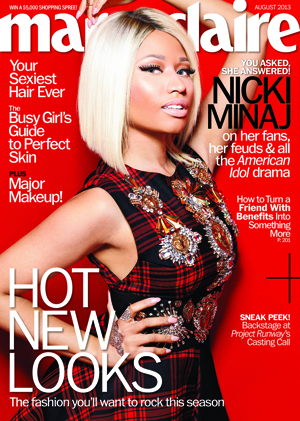 If there was any question that Nicki Minaj likes to be the dominant one in her relationships, her new Marie Claire answers that — definitively.

“Men love independent women,” she tells the magazine in a new cover interview. “You don’t have to be a b****, but there’s nothing wrong with it at times. And: Men are kids at heart. They want to be nourished and pet like a dog.”

Minaj is full of revelations in the wide-ranging interview. The 30-year-old also reveals she had a “weird epiphany” last year and decided that she wants kids.

“For the first time, I allowed myself to feel proud of where music had gotten me, and I felt an overwhelming sense of gratitude,” she says, adding that it’ll help her from developing a huge ego.

“You feel the need to pay it forward, which starts with analyzing yourself with a true desire to grow. I was praying every day, ‘You know what, Lord? I want to be a mom one day, and I want to start becoming the woman who I want to parent my child.’ I wanted all of the feelings of entitlement to leave me, because some people have this life for a year or five or 10 — and a lot of them lose it.”

“I didn’t want to become a person who wasn’t enjoying the moment.”

On her other career aspirations

Minaj was relentless in her pursuit of a rap career. Not surprisingly, she almost put that energy into another career that requires strength and outspokenness: Law.

“I just loved the thought of going into a courtroom with mostly men and defending someone — just being able to persuade people with your words,” she says of her teen desire to be a lawyer. “It seems glamorous in a way. Very inspiring and ballsy.”

Minaj’s one-season run as a judge on American Idol was not without controversy, but she doesn’t make any apologies for it. The rapper tells Marie Claire that the personality she projected at the judge’s table is 100 percent her.

“The perception that people had of me completely changed because there are no cue cards, there’s no script, it wasn’t me performing a song. It was, ‘Let’s see your real personality,'” Minaj adds. “My core is a genuine human being who roots for other people. I didn’t want to blow smoke up their a**. I wanted every contestant to leave with something that they could remember.”

We might not agree with Minaj all the time, but we do appreciate her advice to her young Barbz.

“Don’t chase any man. Put your school first,” she advises.