Eddie Vedder and the guys from Pearl Jam are hitting the road for a 24 city North American tour. 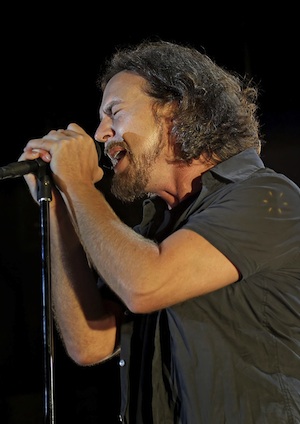 The teenage version of me has so far been loving 2013. The boy bands are back. Nine Inch Nails is back. And now, Pearl Jam is about to release a new album and they are going on a 24-date North American tour.

Kicking off October 11 in Pittsburgh, the band will tour arenas all over the U.S. and Canada before ending up in Seattle on December 6.

Plus, SPIN reports a new Pearl Jam album should be out very soon. However, while the guys admit they have been in the studio, there has not been an official word from the band — yet.

But that may soon change. Currently, the band’s website is counting down to Thursday, July 11 at 3 p.m. EST. Could it be a new single? Perhaps an album release date is in our future.

This upcoming album will be the first from Pearl Jam since 2009’s Backspacer. After over 20 years of writing music together, Pearl Jam front man Eddie Vedder seems to think they’ve finally got it down.

Earlier this year, Vedder told Rolling Stone, “We really work together as a unit these days. We’ve figured out after all these years that if everybody just puts their stamp on it, then it sounds how we want it to. Then it sounds new, ’cause everyone is growing, you know.”

It has been 22 years since Pearl Jam released their debut album Ten, and — along with Nirvana and Soundgarden — brought that distinct Seattle grunge sound to the world.

This past February, Ten reached a feat that only 21 other albums have achieved — it went Diamond selling more than 10 million copies in the United States.

While their sound has changed and evolved over the past 22 years, their music is still distinctly Pearl Jam.

Fans can keep tabs on their favorite band’s concert tour and upcoming releases on Pearl Jam’s website or by using the Twitter hashtag #PearlJam2013. Check out the tour trailer and concert dates below.