On Monday, Wiz Khalifa and Amber Rose made it official by heading down to a courthouse to become Mr. and Mrs. The news was announced by the couple on Twitter. 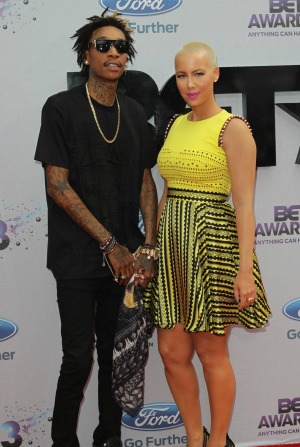 Summer is always a big season for weddings in Hollywood, so add Wiz Khalifa and Amber Rose to that list. On Monday, the couple went to a courthouse to tie the knot.

It was the rapper who announced the news via Twitter.

He wrote, “Me and Amber got married today. Weddings this fall. Thought I’d let yall know.”

The couple, who got engaged in March 2012, are already parents to one son, Sebastian “The Bash” Taylor Thomaz. Their first child was born in February 2013.

While the newlyweds plan on having a ceremony later in the year, they just couldn’t wait to be husband and wife.

She exclaimed, “Yay me & my Baby are officially married!!!”

The duo have been inseparable ever since they began dating in 2011. The relationship quickly resulted in matching finger tattoos and starting a family together.

At the VMAs black carpet in September 2011, after only months of dating, the rapper talked about their future together.

He said, “It’s gonna happen; my baby knows I love her. I’m committed and she’s committed, so we’re just gonna make it happen.”

Less than two years later, they’ve gone from dating to a family to Mr. and Mrs.

The model formerly dated Kim Kardashian’s current boyfriend Kanye West who broke up with Rose shortly before she began dating Khalifa. It was Rose who fueled the rumors that Kardashian and West were sneaking around while they were both in relationships.

Congratulations to the newlyweds!