Vince Vaughn turns a negative into a positive in the Delivery Man trailer. The actor headlines the comedy, in which his character receives some life-altering news. 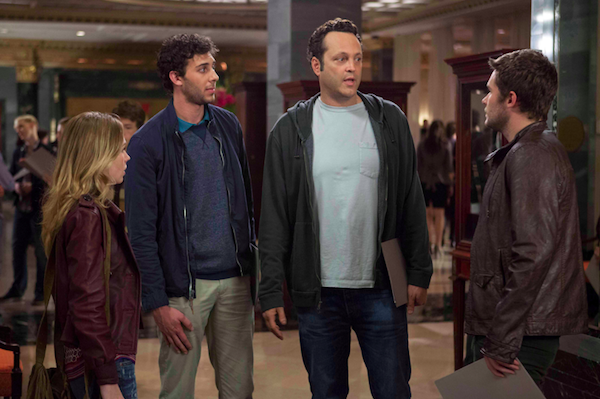 DreamWorks has released a new trailer for their upcoming film, Delivery Man. It’s a comedy starring Vince Vaughn as the unexpected father of over 500 kids. Most men would be overwhelmed by the prospect of having that many children. But Vaughn’s David “Dave” Wozniak takes it in stride.

Nearly 20 years after donating to a sperm bank, Dave’s chickens have come home to roost. They’re suing to learn the identity of their biological father. Dave’s lawyer (played by Chris Pratt) insists that he avoid all contact with the children. But Dave’s never been one to follow the rules.

Sandra Bullock & other actors who play the same characters >>

Instead of running away, Dave embraces it. It’s the first time he’s ever tackled an obstacle head on. Slowly but surely he gets involved in each child’s life. He sees it as a gateway to a greater purpose. He’s never excelled at anything and hasn’t accomplished much — except this.

At the heart of Delivery Man, is a story about a man trying to better himself through his kids. We’ve all seen that before, haven’t we? The only difference is the circumstances. In this film, they’re more extraordinary but the intent is the same.

Check out the new trailer for Delivery Man:

Will you be seeing Delivery Man this fall?