A simple tweet by Justin Bieber drove hundreds of fans to an Omaha, Nebraska, mall over the weekend. 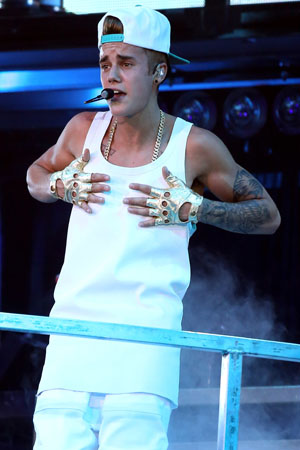 Justin Bieber is known to draw huge crowds of Beliebers everywhere he goes, but a huge crowd of teenage girls caused a near-riot at an Omaha shopping mall over the weekend because they just thought the singer would be there.

It also started when Bieber sent out a tweet before a concert stop in Omaha, Nebraska.

“OMAHA u ready???” he tweeted before retweeting a message from his so-called “swag coach,” Ryan Good.

“On the way…omaha mall,” Good tweeted.

This sent thousands of fans to the Westroads Mall, hoping to catch the singer making a sequel to his 2010 viral video about the “Omaha Mall.”

But he didn’t show up this time, despite a tweet from his bodyguard.

Carly Rae on bad boy Bieber: The media are brutal >>

“There are thousands of Beliebers at the Omaha Mall right now…that is just awesome,” Kenny Hamilton tweeted.

A few teens were injured in the chaos, according to WOWT.

“I felt like I was going to black out because I was sweating really bad and still bleeding,” one 16-year-old told the news station.

Maybe he didn’t show up because he was too busy talking to maybe-on-again girlfriend, Selena Gomez? The singer posted an Instagram shot of Gomez on July 5 with the simple caption “#heartbreaker.”

They were reportedly spotted together on the Fourth of July, but his post might just be to promote his new single… aptly titled “Heartbreaker.”

And that’s not the only song the “Come and Get It” singer inspired on Bieber’s upcoming album. According to Heat World, the 19-year-old wants Gomez back — and he hopes the songs will entice her to give him another try.

“Justin told Selena that he wrote her a bunch of new songs and they are going on the album,” an unnamed source tells the website. “He is desperate for her attention, but she is flattered. Sel loves him but just wants him to treat her better.”

Can’t say we blame you, Selena.