Heidi Klum shares pictures from her vacation, including one where her backside gets more sun than it should.

Judging by the photos she’s been posting on Instagram, Heidi Klum and her children have been having a 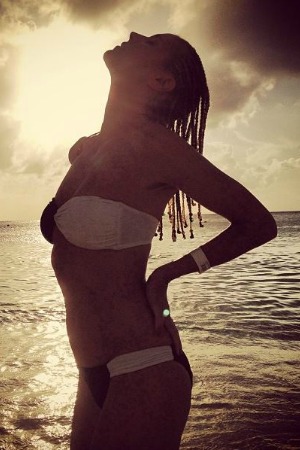 great time on their summer vacation. On the Fourth of July, Klum posted a picture of herself in crystal blue waters, wearing a white bikini and waving a couple of American flags. That’s what you call patriotism, folks.

Subsequent photos showed the America’s Got Talent judge enjoying a majestic view of the ocean from her hotel room and four rubber duckies that she said represented her children. She even let fans watch as she got cornrows put into her hair and later posted another picture showing the completed hairdo. In the comments she called herself “Bahama Mama.”

All of the fun ended in tragedy — OK, maybe not exactly tragedy — when Klum posted a photo that revealed just what happens when you spend too much time in the sun. Baring part of her backside for the camera, Klum showed off a very sunburned booty. Hopefully next time she’ll learn to apply more sunscreen. Ouch!

It seems that Klum survived her burned backside as her next photos showed her basking in a beautiful sunset, what her hair looked like once the braids were taken out, and a pic of some new sandals. As for the hair, Klum said that she’s unsure if she prefers the braids or the big curls. Either way, she still managed to look gorgeous.

None of Klum’s vacation pics showed the infamous tattoo that she recently revealed she was getting removed. Chances are that the tattoo (one that incorporated her ex-husband’s name) is continuing to fade, but it looks like Klum is definitely moving forward from both the tat and the marriage.