Another royal baby is on the way — but this one won’t hold any title at all. 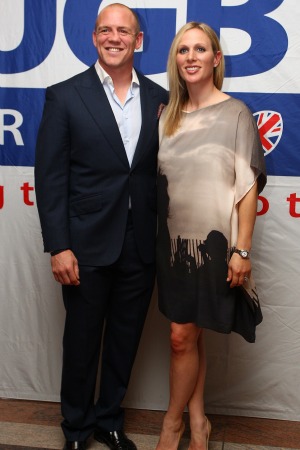 Great Britain has caught baby fever! While Prince William and the former Kate Middleton are expecting their first baby — and eventual heir to the throne — any day now, another royal couple has announced they, too, are expecting.

Zara Phillips, granddaughter to Queen Elizabeth and daughter of Princess Anne, and her husband, former England rugby team captain Mike Tindall, have announced they are expecting their first child.

Get a text when the royal baby is born >>

“Mr. and Mrs. Mike Tindall are very pleased to announce that Zara Tindall is expecting a baby in the New Year,” read a statement from Buckingham Palace.

“The Princess Royal and Captain Mark Phillips, Mr. Phillip and Mrs. Linda Tindall, and members of both families are delighted with the news. This baby will be the first child for Mike and Zara and the third grandchild for The Princess Royal.”

Zara, who holds no royal title at the request of her mother, is an accomplished equestrian and Olympic silver medalist — but she took a frightening tumble off her horse while competing at the Barbury International Eventing and Show, just days before the news was made public. Her PR agency, Juniper Sport, said she was “fine.”

The couple, who wed in 2011, have spoken openly about their desire to start a family but said it was difficult to find time to fit it into their busy schedules.

“Obviously we’re going to have a family. But it’s about timing,” Tindall told reporters at the launch of his charity Rugby For Heroes in May 2012.

“Obviously it’s the Olympics this year, the Europeans next year, the World Championships the year after for her. I want to play for another two years, so it’s just where we find the balance in that.”

The couple were embroiled in scandal shortly after their wedding when Tindall was photographed getting frisky with a woman in a bar later described as an ex-girlfriend. He apologized for the misunderstanding but said he was innocent of any wrongdoing.

Tindall later lost his place on the England rugby team for drunken misbehavior, including participating in a dwarf-tossing competition.

This royal baby will be the fourth great-grandchild to Queen Elizabeth and Prince Philip. Zara’s brother Peter has two daughters, Savannah and Isla, and, of course, Will and Kate are expecting their bundle of joy any minute.