Taylor Swift gives us the best seats in the stadium with the video for her latest single, “Red.” 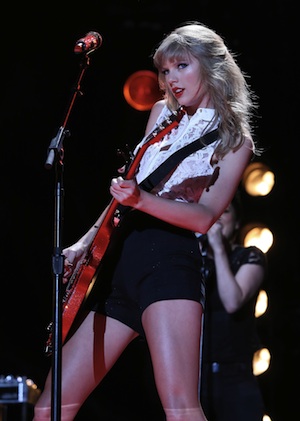 While we were all busy having a cookout, eating watermelon and watching fireworks in our backyards, Taylor Swift had a very different way of celebrating the Fourth of July.

She released the new video for her latest single, “Red.”

The video for the title track off of her 2012 album gives viewers a front-row seat to Taylor’s Red tour.

Part concert, part Broadway musical and all Taylor, the video features quite a few hair tosses, plenty of high-waisted short-shorts and thousands of screaming fans.

Between the red flags waving and the dancers in cool-kid costumes, I thought I was watching a stage performance of Les Misérables meets Rent. Boy, that would be a depressing Broadway show.

But there is nothing depressing about Taylor’s concert. There is confetti. Plus, Taylor flies all over the stadium and plays a guitar that is bigger than she is.

I admittedly have not seen Taylor’s Red tour, but from this video, it kind of looks amazing.

There are only a few more dates left to catch the tour in the United States before the crew packs up and heads over to Australia. And if you’re like me, this may be as close to the tour as we are going to be able to get. It’s too bad: I may be well into my 30s, but I would be transformed into a screaming 14-year-old at a concert like that.

What do you think of the “Red” video? Have you been to a Taylor Swift concert — was it anything like the video?