Tonight on Dexter, Deb may have more of the killer gene than we anticipated, but she’s operating without a code which could lead to some serious trouble. Michael C. Hall directed the episode. 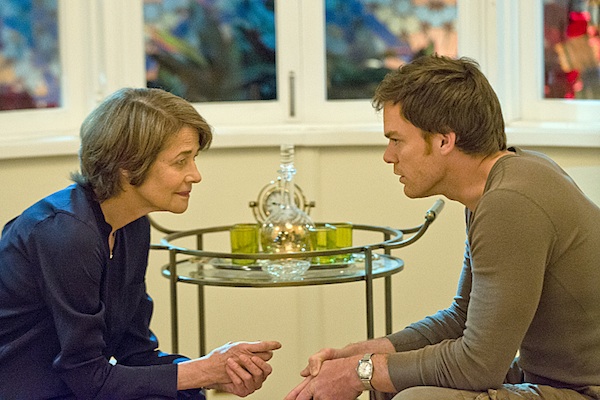 Deb’s falling fast, and there’s no way things can end well at this point. This episode of Dexter, directed by Michael C. Hall, is the tipping point. We can’t see how she can dig a deeper hole for herself than this.

Harry meets with Evelyn on a video recording. He describes a crime scene he took Dexter (Michael C. Hall) to at age 10. Dexter took a piece of glass with a smear of the victim’s blood on it as a trophy.

Evelyn helped create Dexter. She convinced Harry that Dexter’s urges couldn’t be stopped, but they could be controlled. She and Harry came up with the code together, which makes Evelyn Dexter’s spiritual mother in her eyes. She developed a framework for his survival, which saved his life. Now, she needs to call in the favor. Evelyn has a jar filled with the recent victim’s missing piece of brain. She tells Dexter it was left on her doorstep without a return address. She thinks the killer is one of her former patients. She believes the serial killer is targeting her and wants Dexter to find and kill him before the killer can put her brain in a jar like the others. She can’t go to the police because she’s treated other psychopaths using other unorthodox methods. Dexter initially doesn’t want to help, but after watching another Harry video Evelyn gives him, he agrees — if only to keep her close because he doesn’t trust her.

Meanwhile, a killer strangles a man after apologizing. The detectives discover the corpse with a removed cranium and dub the perp The Brain Surgeon. Dexter finds a plastic bag wrapped around a beam nearby and surmises it’s the murder weapon.

Evelyn shows up at the scene and tells Dexter she got another brain in a jar delivery. Evelyn says she only ever felt pride for what Dexter was doing. He’s making the world a better place. 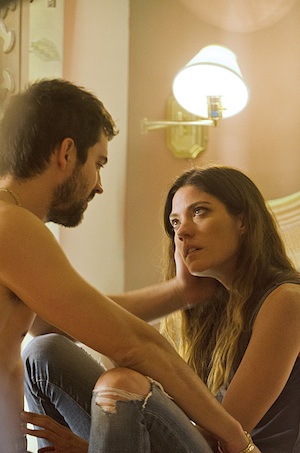 Elway, Deb’s boss, isn’t pleased with her recent case and doesn’t believe she was simply going undercover. He knows she was intimate with Briggs.

Deb (Jennifer Carpenter) takes Elway to the hotel where Briggs died so they can look for the jewels Briggs stole. Deb feels guilty for not turning Briggs in sooner. If she had, he might still be alive.

Deb finds information on a storage unit in Briggs’ room. She separates from Elway and heads off to track down the jewels. El Sapo is watching her from his car.

Dexter needs to get emotional

Dexter asks Evelyn why he doesn’t remember her. She explains Harry didn’t want them to ever meet. Dexter expresses his desire to have someone to talk to after Harry died. Evelyn responds that it’s weird for someone like Dexter to seek an emotional connection like that.

The detectives pull prints from the plastic bag and Dexter finds a match to a man named Sussman. Someone Evelyn doesn’t know. Masuka finds another partial print on the duct tape from the victim’s mouth and tells Dexter he’s also running the print for a match.

Dexter goes to the suspect’s home and snoops around. He has a hunting cabin at a lake, which Dexter thinks is the perfect place for murder.

Turns out, it is. Dexter finds Sussman’s body hanging from the ceiling of his cabin.

Deb arrives at the storage unit. It’s a mess and she begins digging through all the stuff to find the jewelry. She finds it in a bag, but El Sapo shows up and tries to take it. They fight, which ends with Deb getting the crap beaten out of her and El Sapo making off with the jewels.

Then El Sapo turns up dead.

Dexter finds a match to the blood from El Sapo’s crime scene. It belongs to Deb.

She arrives at the police station. Quinn questions her about Briggs, but Dexter interrupts. He takes her outside and tells Deb he knows she killed El Sapo. She says she doesn’t know what happened. She was angry and wanted the jewels back. They found a gun in the glove department. It belongs to Deb, and she asks Dexter to switch it out with a gun that won’t be traced to her.

That night, Dexter gets a call from Evelyn. She’s afraid someone is inside her home. (Seems a little fishy to me. We’re starting to think there’s more to Evelyn than a serial-killer-loving psychologist.)

Dexter arrives and the two find a DVD for Evelyn sitting on her table. It’s a recording showing that Sussman was coerced. Dexter admits his guilt for destroying Deb. Evelyn comforts him by telling him he’s exactly who he needs to be. She believes that without psychopaths, the human race wouldn’t survive.