Miley Cyrus’ image has transformed from her innocent Hannah Montana days. She’s all grown up now and taking the hip-hop world by storm!

Miley Cyrus has a new haircut, her wardrobe seems to have been halved and she is on the fast track to becoming a pro at twerking — a dance move that sees her shaking her bottom in a vigorous manner. 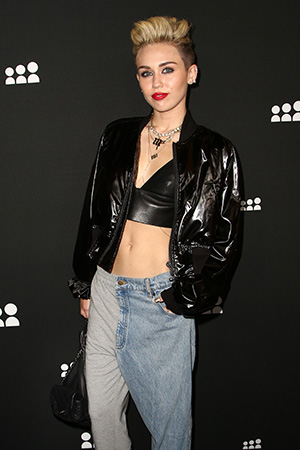 In an interview with Billboard.com, Miley stated that her musical inspirations can be credited to female artists like Joan Jett, Lil’ Kim, Nicki Minaj, Beth Hart and her godmother, Dolly Parton.

Nicki Minaj was flattered by the news that the young star had named her as an inspiration and told E! News, “OMG! Miley is soooo cute and every time I see her I say again and again that she is so damn cute and down to earth. I really love her.”

In his track “Somewhereinamerica,” he raps,

“When I was talking Instagram
Last thing you wanted was your picture snapped
Feds still lurking
They see I’m still putting work in
Cause somewhereinamerica
Miley Cyrus is twerkin’.”

Jay-Z’s rap lyrics playfully mock the 20-year-old singer’s love of the dance craze. However, Miley has received her share of criticism.

Her track “We Can’t Stop,” which broke the Vevo record for the most video views within 24 hours, has not been without its detractors. Comments have been made about Miley’s new attitude, sexually explicit clothing style, the use of gold chains, grills and the downright strange behavior seen in her music video.

Regardless of what your view may be of the young star’s transformation, one thing is certain: The hip-hop industry is thriving!