Channing Tatum is known as the hot guy who steals the girl’s heart, but he wasn’t always such a smooth talker. He opens up about his first girlfriend, his first crush and how he got his wife to go out with him. 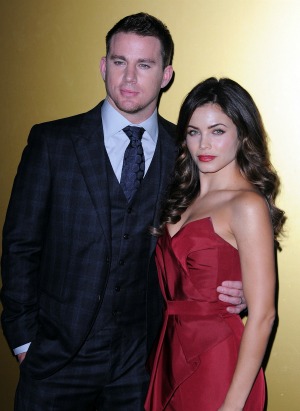 Channing Tatum may be one of the “it” movie stars of the moment (just ask any woman who saw Magic Mike), but that doesn’t mean he isn’t just a normal guy deep down. Tatum spoke with Elle magazine about his life, his love and working his way up in Hollywood.

While the actor is a sex symbol now, he wasn’t always smooth with the ladies. He remembers a time when he wasn’t quite the ladies’ man he is today.

“The first girl I ever kissed was named Danica,” he told Elle. “She broke up with me through a friend who yelled — out the bus window — ‘Oh yeah, Danica doesn’t want to go out with you anymore.’ The whole bus burst into laughter.”

Tatum quickly recovered though, because he always had another girl in mind. He tells the magazine that his celebrity crush was the same as that of many other teenage boys in the ’80s: Alyssa Milano from Who’s the Boss.

Channing Tatum during childbirth: I had a “crying fit” >>

When the Elle reporter reminds Tatum that he too is married, the actor goes on to talk about his own marriage to Jenna Dewan-Tatum. He met his future wife on the set of Step Up, and while he said he always knew he wanted to be married someday, he wasn’t looking for a long-term commitment at the time.

“I had just gotten out of a pretty long relationship, so I was in no way ready for another,” he said. “I was trying to run from what I knew Jenna was — not someone I was just going to date. But one of my buddies was like, ‘What are you doing, man? She’s dope.’ That night I showed up at her hotel room with a sombrero on, and that was it.”

And after seven years, Tatum said the couple has tricks to keep their relationship going strong.

“Jenna and I have a trick we use to check in with each other,” he explained to Elle. “We say, ‘On a scale of one to 10, how much do you love me right now?’ It’s not as romantic as you think. Sometimes it’s like, ‘I love you at a six right now. I have an issue, and you asked. So now I’m going to tell you….'”