After letting the rumors build for months, Rachel Zoe has an emphatic answer when asked straight out if she is pregnant. 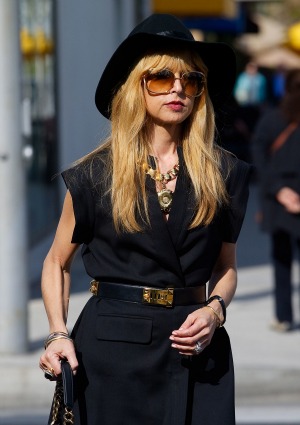 Is she or isn’t she? Rumors have been building for months that celebrity stylist and reality star Rachel Zoe is pregnant with her second child, and she hasn’t exactly done anything to quash those whispers.

Zoe has finally flat-out denied she is pregnant, leaving absolutely no uncertainty.

The Rachel Zoe Project star was approached in Malibu Thursday by a photographer from paparazzi agency X17 Online, who congratulated her on the pregnancy news.

“Who said I was pregnant?” Zoe asked, while holding the hand of her son Skyler.

The videographer replied, “You’re not pregnant?” and Zoe shook her head no.

Back in May, Zoe told SheKnows that as far as a second baby goes, she would welcome it, but she would also be fine with just Skyler.

“I always say that whatever is meant to be will be,” she explained. “Skyler was not planned. It just happened. It was the best thing that has ever happened to me and Rodger unquestionably, and we just stare at him and love him more every second of the day, if that is even possible. The answer is that if it is meant to be it will be, and if we are lucky enough to have another one, we will have another one. I think we are so blessed with Sky and [if] that is all we are supposed to have, then that is OK too.”

We’ll have to wait a bit, it seems, for another fabulously stylish Rachel Zoe pregnancy.