Some thought John Travolta would leave Scientology after the death of his son, but the actor is still hopelessly devoted to the controversial cause. 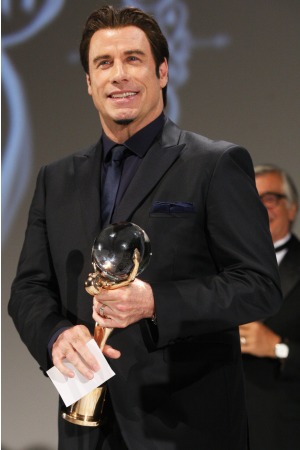 John Travolta has been an adherent of Scientology for 38 years, and despite personal setbacks frowned upon by the church, he shows no sign of turning his back on the controversial religion.

Despite his son’s autism diagnosis — alleged to be unrecognized by Scientology — and the rumors of his secret sexual identity, the actor is still devoted to the religion.

“Well, you know, I love Scientology,” the star said in an interview with The Guardian. “I’ve been involved for 38 years, and I don’t think I’d be here without it because I’ve had a lot of losses and different negative things that have happened over the years and it really got me through brilliantly. I would walk in to a session feeling one way and walk out feeling a lot better.”

“There are techniques for actually ridding you of stresses and pain as opposed to an advisory or recommendation on how to live. I believe L. Ron Hubbard resolved the human mind, and in resolving it he has also resolved human pain — that’s what I really think has happened here.”

Travolta’s son Jett died at age 16 after suffering a seizure during a family vacation, a tragedy Travolta said late actor James Gandolfini helped him deal with.

“… we ended up doing five movies together,” Travolta said. “When my son passed away, he would not leave the city until I was OK, he was worried about me, and I felt it was so human, and so unusual for an actor to have this depth of feeling about someone.”

“Before that, we were shooting a little movie with Salma Hayek [Lonely Hearts]. He was going through a divorce and was very sad. I saw him backstage and said: ‘Jim, did I ever tell you something?’ He said: ‘What?’ and I said: ‘I loved you the moment I met you.’ He started to cry, because he needed to cry. That was a true connection, and I hope these two stories explain it a bit.”